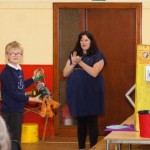 As a conclusion to their IDL (Inter disciplinary Learning) of Eco, the children of Clachan and Skipness Primary Schools put on a show stopping performance. As part of their learning the children had completed either a beach clean or a litter walk around their village.

Starting off with the début of the “Clachness Samba Band”, led by Clachan Class Teacher Mrs Blake. For this the children had all made their own instruments from various pieces of litter or items which were going to be thrown out. They learnt rhythms in school which they then performed as a whole band.

The people of the local community, as well as the children were invited to take part in an Art exhibition as well. They had to make sure that they had used litter or things found on the beach to create their artwork. The entries were fantastic and quite tricky to judge! Thank you to Reverend Thom for his help with this. The winners were; From the School entries – Joseph McAlister for his rocket and Morvern Paisley for her bear. Both of these were made from items found on the beach. Joseph’s using a variety of litter and Morvern’s with stones and shells. There were two categories for the local residents. The winner of the Under 18’s was Leo Silvan, who had created a collage from leaves and card and the Over 18’s was won by Liz Mollar for her fish made from driftwood.

The children also performed a play entitled “The Litter Muncher”, about a village where the people were not good at picking up their litter and a machine does it all for them. When the machine falls asleep they soon realise that it is hard work keeping somewhere clean and they start to help the Litter Muncher by putting all the rubbish in the bin.

The draw of the Grand Raffle was also held. A total of 956 tickets were sold, resulting in each school receiving over £400 for their Parent Council. It is expected that the money will be used in Clachan to enable to the children to participate in activities outside of Kintyre and in Skipness it will be used to develop their outdoor learning area. There were a variety of prizes which were kindly donated by local business’. The winners of the top prizes were Rhuaridh Barbour from Southend who won the overnight stay at the Grand Central Hotel, Glasgow and Ruby Currie from Tayinloan who won the return trip to Islay.