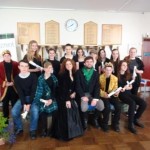 On Cowal Games Friday, 13 pupils from DGS put on a marvellous performance in front of members of the Lamont and Campbell Clans in Dunoon’s Queens Hall – re-enacting the siege of Toward Castle and the Dunoon Massacre of 1646.

The pupil’s had been given an initial story line from the Clan Lamont Society on the lead up to the performance – but then had to develop the story into a creative re-enactment.


The group had the added stress of having only one week to prepare and rehearse the performance before standing up in front of a crowd of approximately 50 people, all of whom had a connection to the two famous clans.

Despite the tight timescale, the group of S4 pupils pulled off a show-stopping performance leaving the supportive and emotional audience in awe of their interpretation of the terrible events that took place not far from where the performance was delivered.

S4 pupil Mason Tomsett, a part of the group, commented on his experiences:

“I thought it was a great experience as I was able to find out about a local story of great significance. The audience were very supportive and helped us all through it.”

“The pupils involved delivered a performance that was well received by their audience. I would like to thank the pupils and staff involved for making such a creative contribution to this year’s Clan Lamont gathering. I was also like to thank the Clan Lamont Society for inviting our young people to be involved and for trusting their talents.”