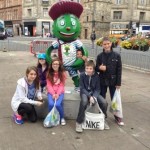 As part of the Scottish Government’s Legacy Gift initiative, Education Scotland was allocated 1000 Games tickets to distribute to children and young people who had engaged with the Game On Scotland programme, as part of the Commonwealth Games.

Schools were invited to apply for tickets by completing a survey about activities held in conjunction with the Game On website and Commonwealth Games, to be put in the ballot for a chance to win 10 tickets for sporting Games tickets.

St. Mun’s, who had engaged in a whole school IDL project on the Games were lucky enough to receive 10 tickets in the ballot, which were distributed to Prize Winners, at the end of year Celebration of Achievements.

On Friday 1st August, the children accompanied by one of their teachers and a parent helper, travelled to the new Emirates arena, where they watched the quarter finals of the badminton, including the match with Kirsty Gilmour of Scotland, the eventual Silver Medal winner.

Walking through the streets of Glasgow to the venue was really exciting. The city was ‘buzzing’ as Glaswegians and visitors alike enjoyed the unique happy atmosphere that the ‘Friendly Games’ is famed for.

The children enjoyed walking part of the ‘Clyde Trail’, where they had their photo taken with the now famed Clyde statues and were lucky enough to see the real ‘Clyde’, who made an appearance at the Badminton.

A memorable day was had by all. Thank you Game On and thank you Glasgow for holding such an amazing Commonwealth Games. 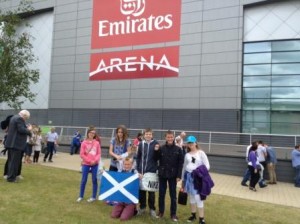