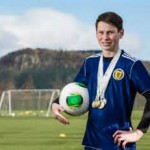 Robert Miller, a 4th year pupil at Dunoon Grammar School recently visited Dunoon Primary School to talk about his recent nomination as Baton Bearer in the Queen’s Baton Relay. During his enthusiastic presentation he said he was surprised to hear he had been selected from so many community nominations as up to 4000 Baton Bearers from 34 local authorities will take part in the relay.

He explained he was diagnosed with cerebal palsy at a young age and the family was informed he would never be able to take part in sports. Despite these barriers, Robert now excels in many areas of sports including athletics and football. We learned that his passion for sport stemmed from his childminder and her husband (local footballer Neil McFarlane) who encouraged him to take up football.

The Queens Baton journey has been developed to share the excitement of Scotland’s countdown to the Commonwealth Games with as many people as possible. The relay will reflect the important role of sport by visiting schools, sporting facilities and leisure centres. It’s hoped that communities will get involved with the Games and use its profile to get more people participating in sports.

Robert delivered a very confident speech to all our pupils who were immensely proud of his ex-pupil status and were inspired by his achievements. We are all very excited for him and will be there to cheer him on during the relay on the 13th of July at Dunoon Stadium. Well done Robert!