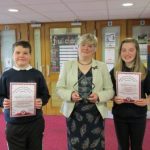 Primary 7 at Park School recently took part in the Blythswood Enterprise competition. For this, they were given £20 to start a business in order to raise money to provide fire engines in Eastern Europe. The class had 4 weeks to make this money grow so they decided to create a moustache themed stationery shop.


Due to their efforts, the class gained a place in the final of the competition which celebrated the top six businesses in Scottish Schools. This morning, Margaret Tooth of Blythswood Care presented the class with the award for ‘Greatest Community Involvement’ as they took their business to schools and shops in the area. Primary 7 would like to say thank you to Lochnell and Dunbeg Primary Schools for their support.