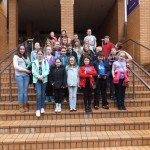 Members of Islay High School Band and the Primary Schools Band travelled to Glasgow last Thursday 20th March. While we were in Glasgow the children heard and worked with world class professional musicians, and had a fantastic tour of the Royal Conservatoire of Scotland. Both Bands also competed at the Mid Argyll Music Festival and played very well indeed, and as an added bonus the Primary Band was awarded the” Helen & Hugh Smith Trophy”. The photo was taken on the steps of the Royal Conservatoire of Scotland.

2 thoughts on “Band news from Islay……”