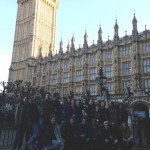 At 11.45pm on the 16th of December, Dunoon Grammar School’s Modern Studies Trip commenced. Those involved (Mrs Hunter, Mr Clark, Mr McNeilage, and 26 pupils from DGS) embarked that evening upon an exciting adventure. During the trip the group would get to visit the Houses of Parliament and experience London during Christmas time, but first they had to endure on an 8 hour bus ride to get there.

The first day of the trip was jam-packed with fun activities. Shopping, visiting the Tower of London, and a ride on the London Eye were all enjoyed by three separate groups from the group, led by Mr McNeilage, Mr Clark, and Mrs Hunter respectively. The three separate groups then reunited for a fun visit to the London Dungeon attraction. Later in the day, the group explored Hyde Park’s Winter Wonderland which was full of market stalls and fun rides in the brisk winter weather. The first day culminated in the group taking in a performance of Wicked: The Musical at the Apollo Victoria Theatre.

The second day of the trip was focussed on our visit to Parliament. Early in the morning the group boarded our coach and made our way to the Houses of Parliament. We passed through security without any problems and walked to the entrance of Westminster Hall chatting excitedly. Before entering, our teachers/chaperones got a chance to show off their photography skills. Some very nice pictures of the group were taken and then we entered the grand hall.
Inside, the group got a chance to meet and talk to Alan Reid MP for the first time that day. The Argyll and Bute MP was able to find time outside of his busy schedule (Wednesday is a very busy day for MPs due to the Prime Minister’s Question Time) to meet some of his young constituents. The meeting was informative and then the group was split up into two, each going on a separate tour of Parliament. Each group got to visit the House of Commons and see a great deal of the impressive building, including the House of Commons chamber, St. Stephen’s Hall and the Central Lobby of Parliament. Each part of the tour was highly educational due to the wealth of historical and political significance that was held in each room. It was interesting to see the House of Commons in person and see where the people of the UK are represented and the government works every day.

After the engaging tours where the pupils were able to ask questions all about the UK Parliament, 15 of the pupils on the trip along with Mrs Hunter and Mr McNeilage were lucky to get the chance to see Prime Minister’s Question Time in person. The people who got to go were chosen randomly in a very fair and democratic process. Those who had won the chance were rushed off to witness what thousands of politically concerned members of the public would watch on television. The remaining pupils of the group along with Mr Clark got to see a debate in the House of Lords. It was informative to see a debate really take place and after the debate the group visited Select Committee Room 10, an impressive room where select committees are able to scrutinise the government. Mr Clark led a question and answer session on the workings of Select Committees. Both the group who saw the Prime Minister’s Question Time and the group who witnessed the debate then met up once again in Westminster Hall for a final conversation with Alan Reid. The pupils were able to ask many questions which were met with thorough answers from the MP. With the end of this short but informative meeting with the MP, the group left Parliament knowing more than they had when they entered. The trip was both enjoyable and informative.