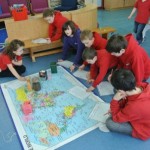 The last week in January was China Week at Lismore Primary School. The children had suggested this themed week earlier in the year as they were keen to learn more about the country and compare it with their own. They had a brainstorm planning session where they decided what they wanted to find out about and the week was developed from these ideas.
It was decided that the events of the week and the children’s learning should be made into a movie with the children both presenting in front of the lens and filming.
Each morning began, as it would in a Chinese school, with some exercise. The children practised the energising art of Tai Chi with the help of our online CyberSport programme. To begin with they found it difficult to balance and to keep their movements smooth but as the week went on they made really good progress.
The week started with finding out a few basic facts about the country – its area and population compared to those of Lismore and Scotland, what the landscape is like, the capital city and about famous landmarks. The children were astounded at the enormous numbers (going into millions and even billions) and represented them using bags of rice.
The children looked at a selection of Chinese artefacts and discussed what they might be used for. Amongst other things these included a silk parasol, a Chinese newspaper and an abacus. It quickly became clear that different children were interested in further investigation about different objects. Some worked out how to use the abacus, whilst others learned more about the silk trade. Having looked at a model terracotta soldier, some wanted to find out more about the Terracotta Army. Each child filmed themselves giving information about the different artefacts.
The children watched a film of a Chinese Tea Ceremony before having a tea tasting session and a British tea party. The children much preferred the British tea party as they felt that the Chinese tea took too long to make and that there wasn’t enough of it once it was made!
The children tried their hand at Chinese calligraphy, using an iPad app to help them to form the correct strokes. They practised the symbols in all sorts of media and even played a symbol drawing game with chalk in the playground. They made their own versions of Chinese wall hangings showing what they had learnt. They also learnt a small amount of Mandarin and were able to record brief conversations.
One morning they all had a go at making sushi. Although this is now thought of as a Japanese dish, it originated in China. The children soon found out why it is called sushi or sticky rice as they tried to roll and squash their rice and vegetables in seaweed wraps. Most of the children thought the sushi was very tasty especially if it was dipped in chilli or soy sauce.
Meals throughout the work were on a Chinese theme, ranging from sweet and sour chicken to stir fry and noodles. One day the children tried crispy duck pancakes which they assembled themselves from duck, spring onions and a choice of sauces. The grand finale of the week was a celebration of Chinese New Year on 31st January. The children welcomed the Year of the Horse with a spectacular Chinese buffet lunch complete with fortune cookies, lucky red envelopes and chopsticks. The table was beautifully decorated in red and gold by Hazel with red banners hanging from the ceiling and traditional music playing in the background.
The children tackled every new experience with energy and enthusiasm – always keen to find out more and to share interesting facts. Over the course of the week, the children developed many skills for learning, life and work – working together, presenting themselves confidently, applying previously learnt knowledge and skills, remembering and understanding information to name but a few.
The week was a rich learning experience for all the children and they are already suggesting an American Week next! Many thanks to everyone who helped to make the week such a success but especially to Hazel who spent a lot of time planning menus, cooking special meals and arranging the New Year Buffet. 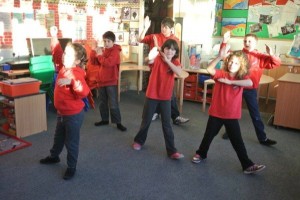 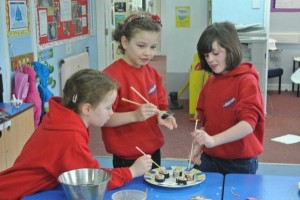 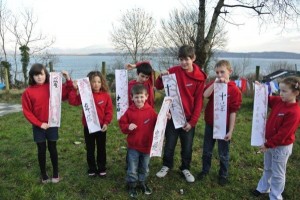