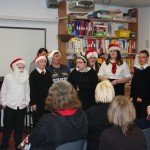 Every year in Dunoon Grammar School, The Learning Support Department hosts a Christmas Fayre to raise money for their chosen charity, ‘World Vision.’ ‘World Vision’ is a charity that helps children and their community to achieve success in far less privileged parts of the world than ours. This year’s event was similar to previous years but unlike previous years, when teachers have organised everything, this year S6 pupil Rebecca Westwood played the coordinating role.

The Fayre consisted of a number of festive stalls including homemade decorations and cards, a tombola, a plant stall, chocolates and Tony’s second hand toy stall. The afternoon also had live entertainment with Christmas songs from learning centre pupils, sung in both French and English, a classical clarinet recital from Joseph Halligan and Mr. T and Rhiannon Harvey singing and playing her guitar. The entertainment was interrupted by Santa who arrived to deliver presents to all learning centre pupils.

Rebecca Westwood, coordinator, said of the event, “The afternoon went very well and when Santa came in (slightly late because his trousers had split and needed and emergency repair job) it was great to see the learning centre pupil’s faces light up with excitement. Over all, the event made more than £250.00 for ‘World Vision’. I would like to thank all the people who supported us. I learned loads from hosting this year’s Christmas Fayre.”