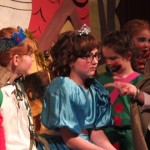 There were loud shouts of “Oh no it isn’t!” and “Oh yes it is!” on Thursday 12th December when Small Isles Pre-Five and Primary children performed Snow White in the village hall. Audiences in the afternoon and evening were enthralled with tales of evil queens, crazy boffins and poor Snow White, who did, eventually get her prince!

The cast was extensive (well as extensive as it could be with only thirteen children!), and some children took on three parts which involved some interesting (and very quick) costume changes. Everyone performed and sang beautifully – well done all! Lots of helpers from the community joined in to make props, organise costumes, do hair and make up, carry out furniture (and children) removal and do many many things to help. We couldn’t have done it without them, it was a real team effort.