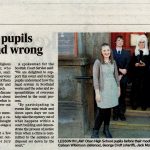 Pupils from Oban High School’s Philosophy Club appeared at the town’s sheriff court yesterday. But thankfully the bright young things were only staging a mock trial, as they looked deeper into their studies on right and wrong.

The trial was fictitious, but was based on real Scottish law.
The case was of a woman accused of driving dangerously by knocking down a high school pupil and breaking both her legs.