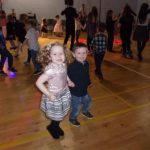 The nursery parent group planned and hosted their first ever disco for the children who are at the Early level. It was extremely well attended by the children and their families and it was a wonderful success.  Local DJ, George Noble, kept the dancing going with his wonderful selection of music.  A huge number of P6 children volunteered to be buddies and led the dancing, helped serve juice and a biscuit and were fantastic at tidying up at the end.  Overall there was great excitement and the children would now like a disco every week!
END_OF_DOCUMENT_TOKEN_TO_BE_REPLACED