On Friday the 4th May all schools came to Port Ellen Primary School except from the school in Jura they came for the World War One commemoration. The choir walked down  to the pier to sing a Gaelic  song with the Adult choir. About half an hour later the schools walked down to the Islay Hotel to wave the handmade flags that we made at Port Ellen Primary School. They waved the flags to welcome the Princess Royal for the WW1 commemorations and to remember the brave soldiers that were in World War One and that the fought for there country for us. We also thought about the vrave Islay people who helped the survivors of the Tuscania and Otranto.

This term we have been learning about how WW1 affected the lives of people on Islay and Port Ellen by learning about the sinking of the Tuscania and the Otranto and the lives of the local people at the time.  All through our WW100 topic we have made art work, researched from primary sources of evidence online, imagined letters and put ourselves in the soldiers shoes. The reason for this is that on Friday 4 May it had been one hundred years since WW1 and we had a big remembrance event on Islay.  Everyone around the island came to remember WW100 in Port Ellen. The Islay Quilters had worked with local community groups to make the state flags of the US soldiers who died in the two sinkings, including our school; our class made the flag for the state of Michegan.   The five schools on Islay came together to carry the flags in a procession to the pier and then we put them at the Ramsay hall for display. For the project we used our research to write letters pretending to be one of the soldiers from the Port Ellen war memorial, that we had chosen, writing to their family.   We included the name of our soldiers, any interesting facts, information about family members and their jobs. In the hall there is information about the Tuscania, Otranto, and soldiers that fought in the war. Jack used a map of Port Ellen at the time to show where the soldiers lived.  The art work we did was about the Tuscania and all different things about the war and was mixed media. The other schools also had things on display.  We liked learning about the war and how the war started and how it impacted on people here on Islay.

By Jack and Aaron

On may the 4th Islay came together to remember all the people that died in WW1 in the sinking of the Tuscania and the Otranto and to save us and make life better for the future people. Everyone went to the pier by the Islay hotel in Port Ellen and there was lots of solders with guns, there were bands too. Later on Princess Anne came in a black car with a lot of security. I didn’t really see Princess Anne I just saw her get out the car then walk towards the memorial. All the schools on Islay got together to hold the flags of the states of America, which had been made by the Islay Quilters and lots of people in the community as well as the schools; Port Ellen P67 made Michegan. We stood on a sidewalk and held out our flags. We were greeted by MP’s and navy officers and we also got to meet the American ambassador and his wife. I think that it was a fun day and it was an honer to be there because we were representing all the different states America by holding the flags which we had made.

By Ciaran and Charlie 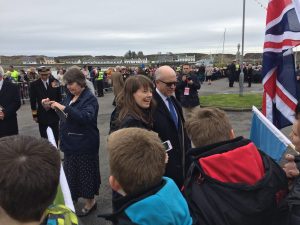 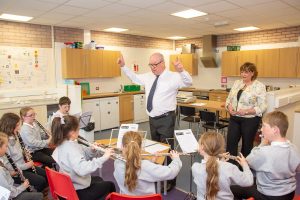 On Thursday 3rd of May Fiona Hyslop came in. The PortEllen band and two people from Bowmore played their instruments in front of Fiona Hyslop, they played Mary had a Little Lamb and Twinkle Twinkle Little Star. Fiona Hyslop is an MSP and the minister of culture. ‘I enjoyed it because it was a one time thing only and it was really fun,’ says Donald  from primary six and he is in the band. The band consisted of Holly, Donald, Charlie, Dearbhla, Charlet, Millie, Liam and Emily. The band was in practising at breaks for Fiona Hyslop and were exited to play in front of her. 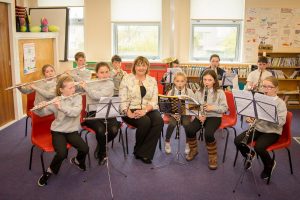 By Holly and Donald