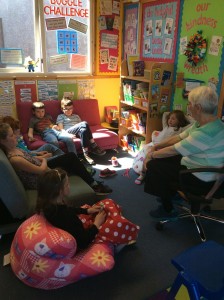 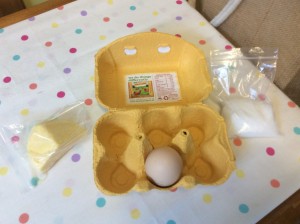 Mrs French came into school today to talk to us about living in London during WWII. Mrs French was a little girl living with her mum and dad in London when the war started. She was not evacuated to the country, she stayed at home and her family survived the blitz! She told us lots of interesting things about her experiences in the war time. She talked to us about rations and showed us how much butter, sugar and egg(s) everyone got per week. Only 2oz of sugar and butter and only 1 egg! Most people in London didn’t even get a proper egg, they got powdered egg! She told us a story about going to her friends birthday party during the war and the birthday cake was a cardboard box decorated because the rations could not stretch far enough to make a cake. There was no fillings to make sandwiches with so all the bairns got a slice of bread with a spread of fat on it that had been saved from cooking meat. It was very interesting listening to Mrs French, thank-you for coming in to school to talk to us Mrs French 🙂