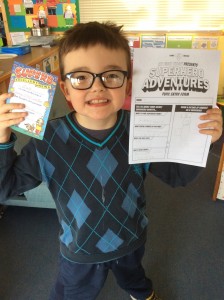 Scott is our new star writer. He wrote a fantastic imaginative story. In the story Scott was a superhero called Ginger Beard on an superhero adventure. He had to save the world from his enemy Patrick the starfish. He used his super powers, flying and super speed, to defeat Patrick. Scott used some super onomatopoeia words in his story – ‘pow’ ‘zoom’ ‘wham’ ‘puff’ and a few more! Well done Scott, you have a super imagination. 🙂