On Tuesday the 10th December, We had to get to school before 8.45 because we were going on a school trip to three different places.

Our bus picked us up at school, we all rushed on the bus and sat down as fast as we could me and Mia sat in the second to back seats next to Bradley. When we arrived in Ulsta we picked up Abby, Melissa, Neil and Leah. On the ferry we went upstairs and sat down on the comfy red chairs, we sat there for 20 minutes telling jokes. Then finally we arrived in Toft.

When we got off the ferry, it seemed to take forever to Lerwick!

We arrived in Lerwick, and went to our first stop which was The Energy Recovery Plant, we met our tour guides called Brydon and Libby, who took us into a room that was like a meeting room and gave a small presentation which was about what they do.

We got hard hats and glasses to wear because we were going to go into potentially dangerous rooms.

First we had to clamber down a lot of stairs; we walked into the control room which was full of windows. We saw a massive claw thing that was hung from the room. There was a man who sat in a large comfy chair and controlled the claw. He moved the claw down to pick up the rubbish, and moved the claw towards the triple glazed glass and showed us how it could drop things.

We saw a lot of rubbish, an Essikert was reversing and then emptying it’s load. When the Essikert was tipping we thought it was going to fall into the dump.  The man (who was controlling the claw) pointed out that the orange bags where from the hospitals.

Next we walked down another lot of stairs and walked into a room which was a bit smelly, and saw tall walls that where protecting the furnace from going out. Apparently it is usually hot and stuffy in there but (the day we were there) it was cooler. Libby took us one at a time into a small little corridor, which had tall walls. Libby pulled a small leaver which showed us how what the furnace looked like. It was kept at 1,200°C, it can get hotter but that’s not a good thing.  I learned that people have to clean out the furnace 3 times every year!

Next we got back into the bus and drove up the road a bit, we had to put on our hi-vest jackets on (mine was orange). We met Brydon (one of our tour guides!) next to the recycling box’s. We went up the Landfill site where we saw tons and tons of sea gulls (It would be a bird watchers dream come true!) It was quite smelly and you could see a lot of bird poop on the path (that we just walked on) We went into this place with loads and loads of skips, I learned that people could come and dump their rubbish if they have missed the essikert.

The skips were labelled but Brydon thinks that nobody pays attention to the signs because there is rubbish that shouldn’t be in a couple of skips. I found out that the only place you can recycle plasterboards is in Lerwick.

We went to the Shetland Museum. As soon as we got through the revolving doors, we started skipwalk (which is a word that means skipping at the pace of walking) into the Learning Room. We had our pack lunches (that Elsie our cook made!) we had sandwiches, sausage rolls, fruit and flapjacks. Mrs Breyley said we could explore as long as we looked after the younger ones and make sure no one gets lost.

In the afternoon, we went to the Shetland Heat Energy and Power Limited.  It was a curvy archway building. It was a building that stood out from the rest of the buildings.

Inside the building we met the manager called Neville Martin. We sat in the managers room, and listened to his presentation he got a laser and pointed at the map that was behind me. He said there wasn’t much to see but he would try and show us everything that was in the building! We saw a white box that heats up the water, Neville told us that he works closely with The Energy Recovery Plant, apparently there was a power cut at 4.00am in the morning, because it was 4 am in the morning it didn’t affect the whole of Lerwick, (because The Energy Recovery Plant was heating water and power for the whole of Lerwick.)

Neville gave us torches and leaflets.

I learned that The Energy Recovery Plant and Shetland Heat Energy and Power Limited worked together to make heat for people in Lerwick. 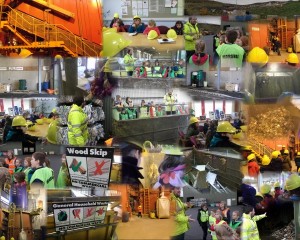