On Tuesday we went on a school trip to the Energy Recovery Plant. We went in to see the claw. We saw rubbish that people throw away. There was a lot of stuff. There were two people guiding us around. They were called Libby and Brydon. We went outside to see the land fill. I learned that they burn the rubbish to make heat. It goes around Lerwick. We also saw the essikert dump all the rubbish. I learned that the furnace is really hot like a volcano. We wore a hard helmet and safety glasses.

Rubbish in the skips. You can put things in the skip. They were metal. Brydon showed us one of the pipes that goes around Lerwick, one of the places is the Toll clock shopping centre. And on the pipes is foam around and duck tape to keep warm when the water is going around.  I also learned that it loses 10 times it’s warmth when it goes around Lerwick. I learned that if you turn on a warm tap it heats up quickly. 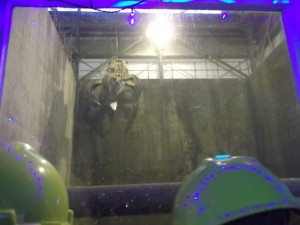