We have been running transition sessions over the last few weeks for the new class and the children have been working together, indoors and out, getting to know each other and getting a feel for the learning that is going to happen next year.

Part of our sessions looked at ourselves and our hopes for the coming year and the new class have designed avatars to share this – see below.

Having had discussions about what we love to do and shared this with the group, we made some models of ourselves using clay – impressive designs below looking carefully at the mirror to include all our features and following initial instructions well to make some outstanding portraits! 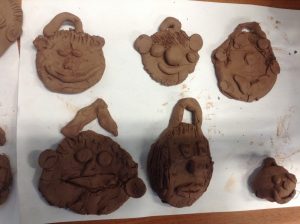 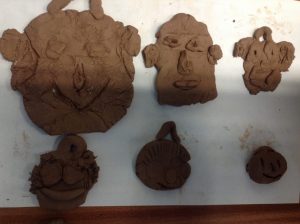 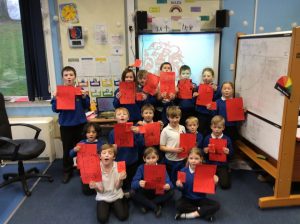 We have been celebrating the Year of the Rooster in our Chinese classes over the last few weeks, focusing particularly on our writing skills – looking at the development of Chinese characters and how radicals are put together to make characters, then characters put together to make words. We practiced in sand and then made posters using the animal character and the written Chinese numbers for the year of our birth. We also made Red Envelopes (hong b’oww), tying it in with our own versions of Rabbie Burn’s “My Love is Like a Red, Red Rose”. 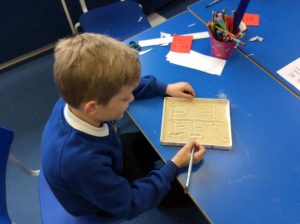 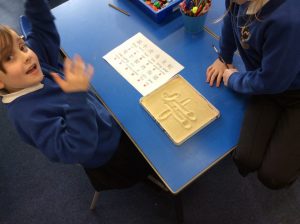 Practicing writing our animal characters in sand, then shaking them to disapear!

Our oral focus has been on talking about different food types and how to say I like (war shee-hwuan) and I want (war y’oww). To hit it home we learnt how to make noodles, first kneading the dough, then rolling and using the noodle maker to make strings of noodles. We put them in our home-made ember bowls and used our whittled chopsticks to eat them!

We also learnt the story of how the Rooster lost its horns and how the dragon managed to persuade the Jade Emperor to let it join the New Year Race. Here’s a brief clip from the story:

Our aim at Forest School this week was to experience what it was like to be living in more primitive times, as we begin our topic on Medieval Life. Although the ember bowls have a more primitive history, we talked through what it would be like to be living more hand to mouth and how many more people during medieval times would have been farmers or certainly spent time working off the land.

We had to saw our own fairly flat ‘wood cookies’ and then use carefully blown embers to burn out a hollow in the wood. The children learnt patience in their sawing and blowing and had to take care and risk assess when using the embers. A few children experimented in making small hand-drilled holes in the wood and this helped considerably in getting started (though discussion over whether it was ‘fair’ also ensued).

Forest School became Snow School last week! We were designing in the snow and doing both science and mathematics challenges: fractions of natural or snow-made materials, 5 snowball doubling, using a pivot/fulcrum to fire a snowball, building snow creatures with French features and seeing how far we could move snow without pushing or pulling. 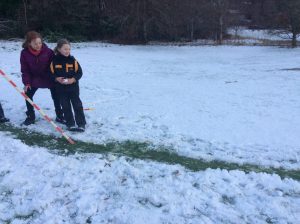 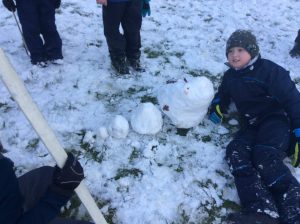 A: “I loved learning about forces because I learned how to move a snow ball without touching it.” 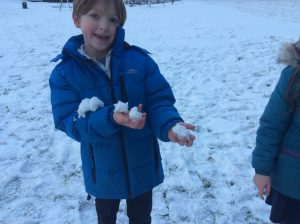 C: “I liked launching the snowballs in snow school – using a fulcrum to send it about 2 metres or more.” 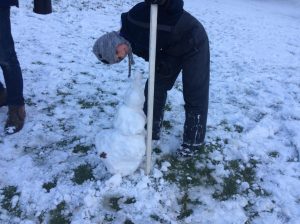 E: “I loved making a snow penguin. It looked exactly like a penguin. I loved measuring how deep the snow was.” 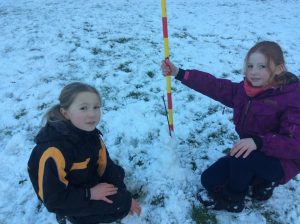 C: “I liked the snow animals because it was hard to find stuff for the face.” 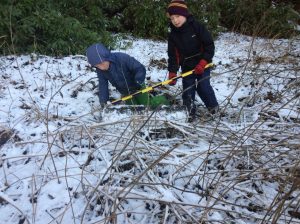 A: “During snow school we even measured out objects, telling them as fractions of a metre stick.” 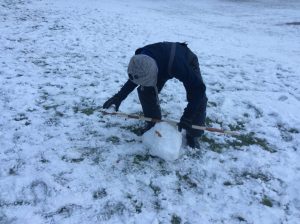 Literacy in P3/4/5 this week has seen us talking and writing about our holidays, setting resolutions and doing some persuasive arguments. In French we looked at Facial Descriptions and in Chinese the New Year Animals.
M: “We were doing persuasive writing and we were doing Chinese art – amazing.”
E: “I love handwriting because I am good at it.”
C: “I enjoyed learning about the  Chinese New Year Animals.”
C: “I liked making the Chinese New Year pictures. They inspired me to remember the story.”
J: “I learnt to do a French game…the monster game where someone says numbers, colours and face parts in French and you draw them.”
E: “I enjoyed Chinese this week because we talked about Chinese New Year.”
S: “I liked my persuasive writing because I learnt how to persuade people through facts, quotes and reasons.”

In Science we are looking at forces and how they affect objects by either changing their shape or making them move/stop moving, change direction, or fall to the ground. We made pirate ships that will be used to investigate different forces. 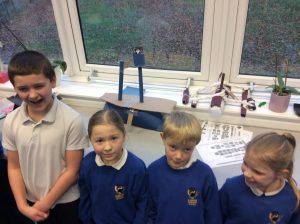 It was really, really exciting and hard to make this book trailer and we hope you like it. If you have any questions, post a comment and now my team are going to write something.  – Logan

It was a very good experience making a trailer and it was tough but we got through it. We had to co-operate and work together. We had to listen to each other. We used literacy skills of visualising and summarising. – Murray

We could take turns writing. It was hard to listen to each other. Everyone had to be quiet except the  person speaking. – Annie

It was great to work together. –  Amelia

It was very exciting to make a book trailer and it was quite hard. We made it one at a time. -Andrei

We had to use listening, turn-taking, writing and spelling skills. It was hard to divide the jobs. – Aileen

We used our skills in thinking, reading, co-operating, writing, storyboarding and directing to make a trailer for Never Tickle a Tiger.

It was a very interactive experience – Jamie

I really liked making a trailer because seeing it after we’d made it was really amazing. – Sanjeevan

It was really cool being a leader because I had to help the group to make decisions. See you at the cinema! – Cameron

It was very cool working together. At the start I felt excited. When it was made, I felt proud.  – Calum

Hope you enjoy it,

The P3 and 4 boys and girls had 5 visitors this afternoon from P1 and 2 and we chose unanimously to share our learning about energy and circuits.

Mr. Liney laid out the equipment but we organised everything else. We worked co-operatively in groups of 3 and helped the wee ones to make a  circuit and taught them the science words for all the parts. We problem solved how to make a switch from classroom stationery and some of us went on to make parallel circuits.

It was a joy to hear the language used and the learning shared.

‘We call it a lamp. Bulbs grow in the garden.’

‘Will we make a simple circuit first?’

‘Can you see it’s an unbroken loop?’

‘This is a cell. Now this is a battery of cells.’

If you can explain it to a P1, you understand it, right enough!

We are making book trailers so that we can encourage other people to read a book we liked – Never Tickle a Tiger. Cameron and Logan wrote a first draft of a storyboard and then made teams to help them make the trailers. It is a very good experience and we love it because we are learning new skills.

Mr Liney had to learn too and he made this trailer for The Girl With the Yellow Bag, but ours will be better because they are for Never Tickle a Tiger! We will post them when they are ready

We held a sharing assembly on Friday. Every girl and boy in the whole school brought a piece of work that demonstrated how we had learned new skills or developed skills we already had. Some people brought their Beautiful Thoughts poems and talked about their presentation skills and use of simile. Some of us brought our disgusting food from Mr Twit’s beard, maths work or pieces of collage. We were all pleased to talk about our work and how our skills were improving. We had to show good active listening skills, giving good eye contact, encouraging and asking questions. 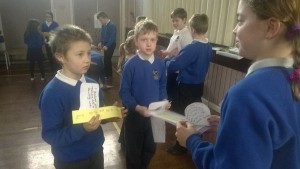