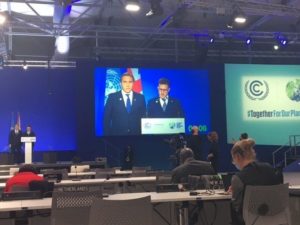 Many months ago I expressed an interest in being involved in supporting COP26. Partly driven by my background as a teacher of geography and modern studies, I have maintained an interest in the environment and geopolitics. But my motivation was of course more fundamental; there are few of us that can’t have been moved and therefore called to action recently as we have witnessed the awful impact of global warming on people and our planet. Added to that, I hoped that COP26 would be a real success and game changer. As a proud Glaswegian, Scot and Brit, I hoped that we would be remembered positively by the thousands who attended. I was very fortunate to be offered the role of Delegation Liaison Officer (DLO) working with the Foreign, Commonwealth and Development Office (FCDO).

Each DLO was there to prepare for the arrival of world leaders and their delegations. I was assigned the San Marino delegation and it was a pleasure to work with the country’s leaders and ministers. San Marino, for those who might not know, is a small enclave within Italy. It is the oldest republic in the world, dating back to around 300 AD. My life as a DLO was made more interesting as this little nation is unique – it is the only country in the world with two Heads of State (Captains Regent) – a fact that very few people are aware of – and this meant that in any meetings or photo opportunities I had to ensure that this was realised and respected. The Captains Regent (sounds much better in the Italian – Capitani Reggenti) could never be separated and never one treated more important than the other. Whilst San Marino is the oldest country in the world, it has the youngest Head of State (joint), Captain Regent Giacomo Simoncini who at a mere 27 makes other world leaders like Emmanuel Macron and Justin Trudeau look like old men! Captain Regent Francesco Mussoni makes up the other half of the joint Heads of State for the Republic. 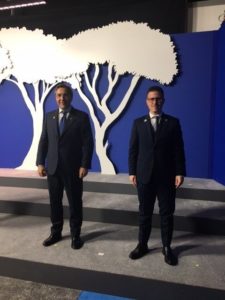 For a number of weeks prior to the World Leaders’ Summit I was involved in ensuring the logistics of travel, border control, airport greeting, Covid testing, accommodation and security was tailored appropriately for the delegation. The two days of the summit were frenetic. I had the privilege of access to all areas including the VVIP lounge where World Leaders spent their down time. As a DLO I had to facilitate bi-lateral meetings and brush-byes with presidents, prime ministers and ministers all within a time-restricted yet fluid situation. This also meant guiding leaders to the correct location at precise times throughout the two days. A huge moment was the delivery of the National Statement when each country was given three minutes to tell the world about their commitment to change. As they say in the musical Hamilton, I can honestly now say “I was in the room where it happened.”

San Marino was one of the 40 original countries to sign up to the Glasgow Leaders’ declaration on forest and land use. This demonstrates a commitment to halt and reverse deforestation by 2030. It is so pleasing to think our city’s name will be associated with this huge initiative.

The role of DLO was challenging in a number of ways for us. Can you imagine the power of persuasion required to convince over 100 World Leaders that it was a good idea to go from the SEC (blue zone) to Kelvingrove Art Gallery for the evening reception by way of an electric bus? Or how to tactfully choreograph the timing and order of such an unusual experience – each of us with the tickets to allow our leaders on the bus! 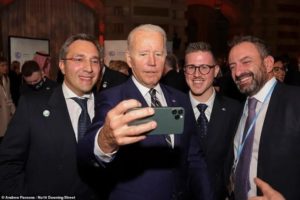 It was for me a real honour to be involved in such an historic event. Who would have thought that an opportunity would present itself allowing one to literally rub shoulders with cardinals, presidents and prime ministers. Fighting with the world’s press was a regular white-knuckle ride and I am afraid at one point I came off the worse for wear under the scrum of photographers chasing down President Macron. The job was physically exhausting (my commute started at 5.47 am in Bishopton station each day and lasted well into the night), exhilarating and rewarding. To my colleagues I would reflect that many of the skills we develop as HMI stood me in good stead for this role. Resilience, diplomacy, managing expectations, receiving huge amounts of information and presenting it accurately and simply, keeping calm and responding positively – they are all in our tool bag. A younger me might be tempted to pursue a career with the FCDO!

In finishing, Her Majesty The Queen urged world leaders to earn a place in history by answering the call of future generations. I hope COP26 galvanises our leaders, yes – but more than just our leaders – businesses and civic society too including our own organisation to re-double our efforts to make COP26 the defining moment it needs to be.