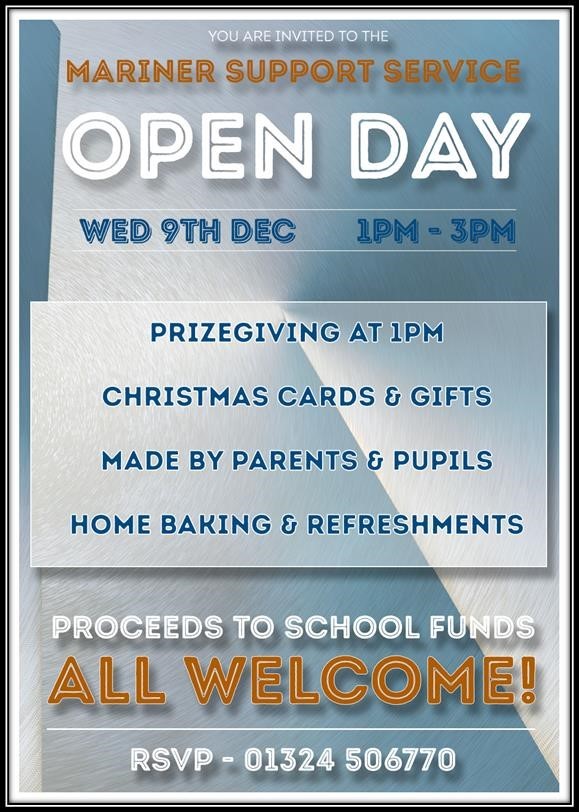 Yvonne McBlain enjoyed popping into the Mariner Support Service Christmas Open Afternoon. Staff, pupils and parents have been working hard over the last weeks to prepare for this event and there was lots to see.

The event opened with a celebration of learning by pupils, with prizes for good work done this term. The young people demonstrated their enterprise and social skills during the event – selling home baking, raffle tickets, and meeting and greeting. Brandon was particularly welcoming, polite, and charming. 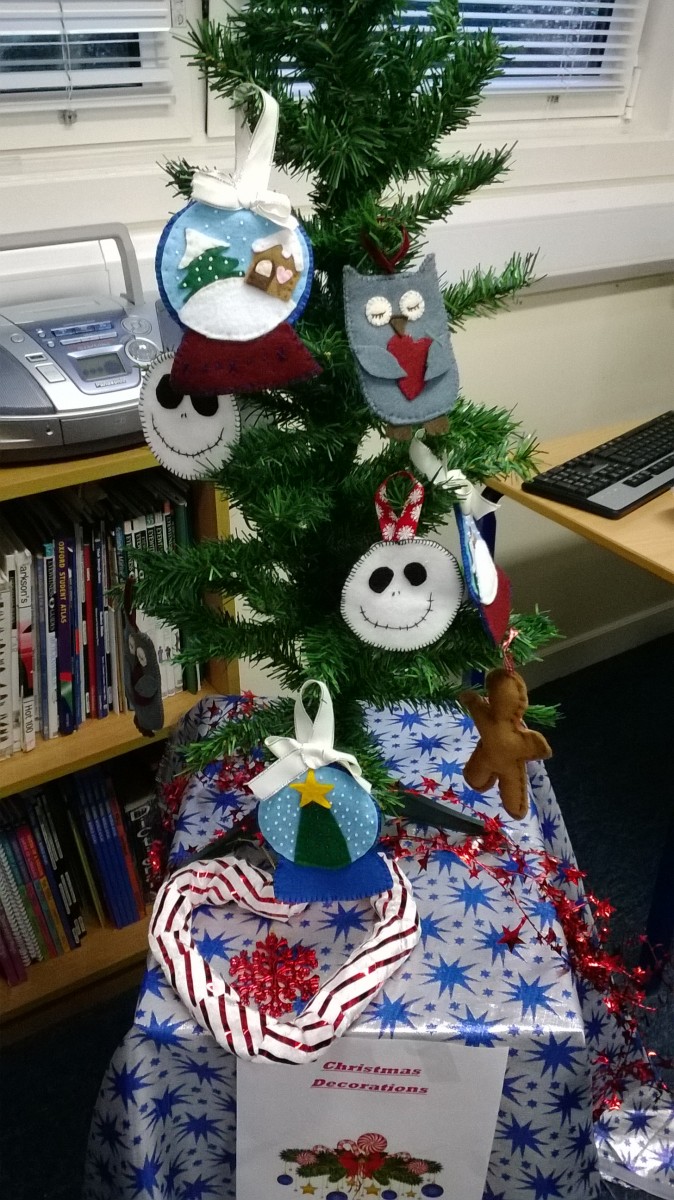 The parents’ group have been creating all sorts of crafts in school on Wednesday afternoons. These were all for sale to help raise money for school funds, and included Christmas tree decorations, wreaths, jewellery, and home baking. This is one of the ways in which Mariner Support Service builds connections with parents and carers.

This event was a valuable way to build the life and ethos of the school, while progressing young people’s skills and experiences. 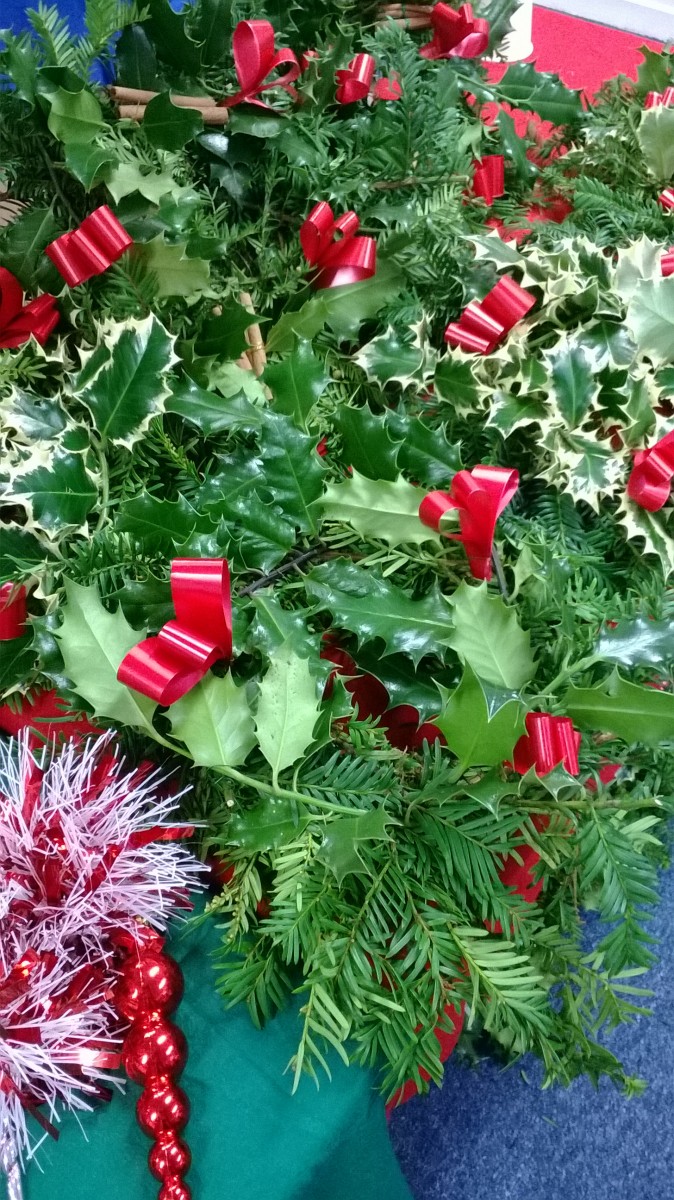 On 2nd of December, Claire Quigley, head teacher of Whitecross PS and her staff hosted an unusual celebratory event on the 60th anniversary of the opening of their school.

This involved visitors in making a terracotta clay tile which was personal to them. These will be dried, fired, and added to a tiled display in the foyer of the school. Every pupil in the school has already made their tile, and many were primed and ready to help their parents and guests make one too. Pupils from Graeme HS supported their primary colleagues in making their tiles, and Henry Meldrum, art teacher has fired them all.

Visitors were taken into the school hall, and shown examples of the pupils’ tiles. Claire and colleagues demonstrated how to make the basic tile slab, then guests could decide how it should be decorated. Tony Bragg, team manager – performance management, and Eddie MacLennan, team manager – workforce development, joined in, and Yvonne McBlain, curriculum support officer, was delighted to make the “1955” date tiles which will be part of the commemorative display. 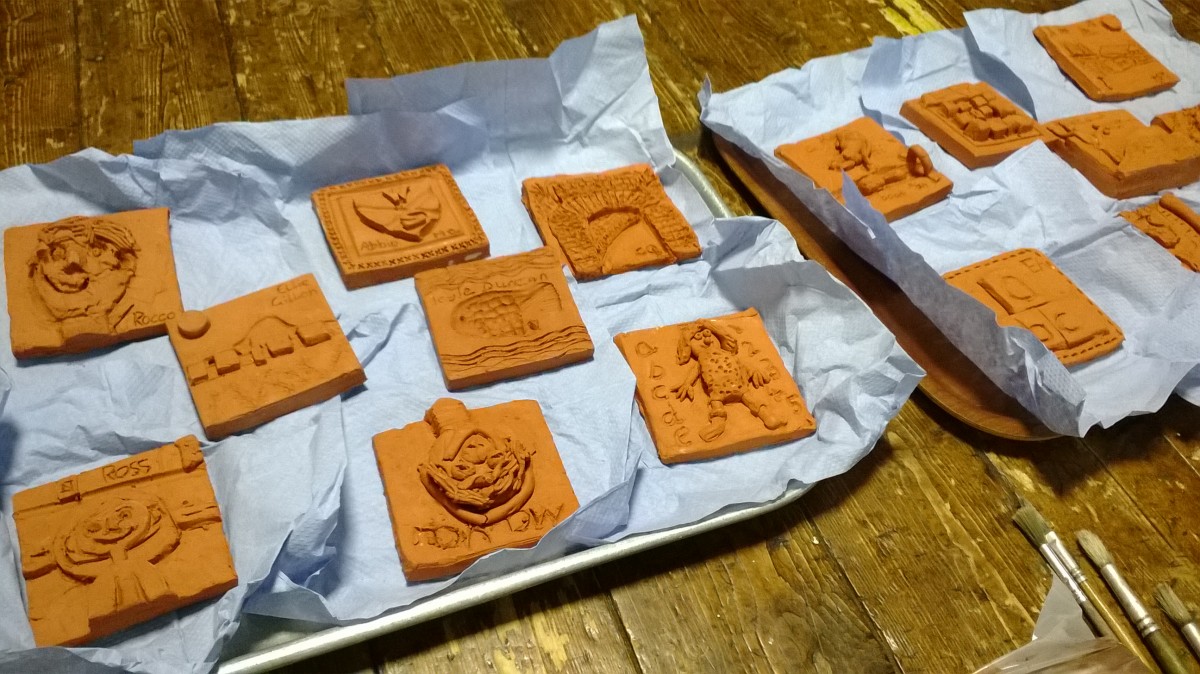 Jessie Dick came along and worked with her granddaughter Diane Balloch to make a tile. Both are former pupils of the school – Diane’s maiden name is Bryson, and her gran was known as Janet Reid, winner of the school dux medal in 1941-42. Jessie lives locally and enjoys return visits to the school, Diane said “It hasn’t really changed that much – the cloakrooms are gone – they’ve been made into classrooms now.” 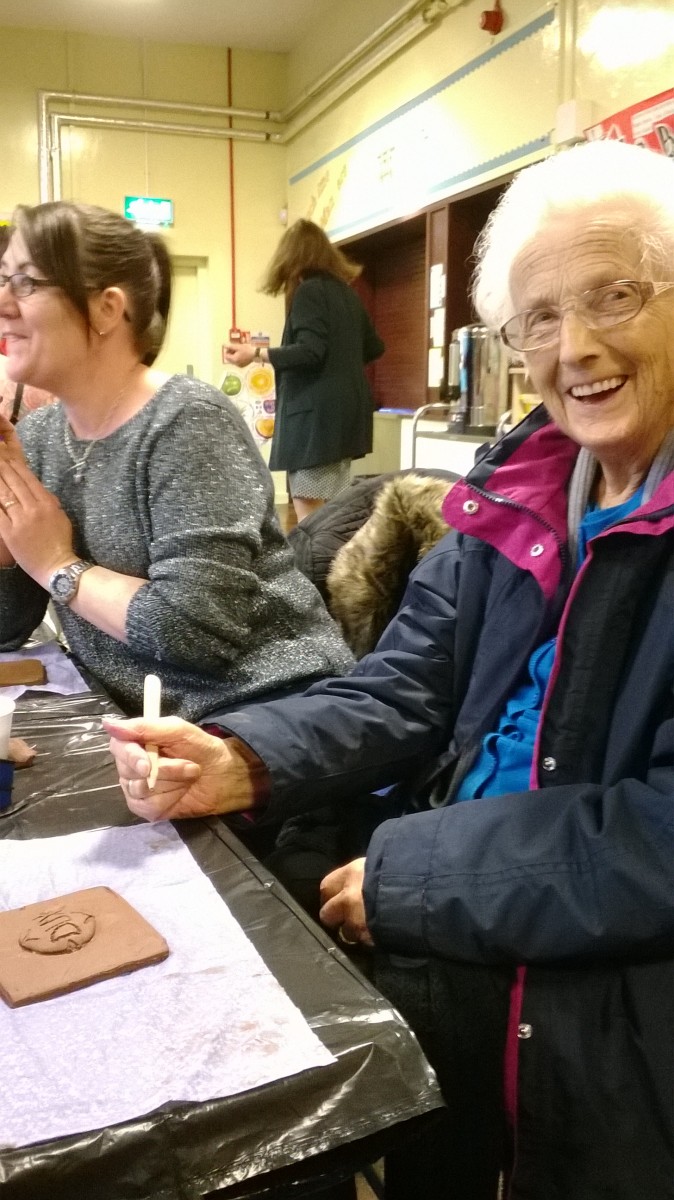 Claire, staff colleagues, and pupils, will host a formal launch event to unveil the tile display when installation is complete.

We are sad to say that in the short time since this event Jessie Dick sadly passed away.  Our thoughts are with her family.

Yesterday, Yvonne McBlain, Curriculum Support Teacher with Falkirk Council Education Services was pleased to accompany two Swedish student teachers from the University of Gothenburg on their visit to find out about Falkirk storyline practice. Catrin and Sofia are working on their final dissertations and are exploring how teachers in two different education systems employ the storyline approach to progress learning in their classrooms. At St Francis Xavier’s RC PS, they interviewed Vikki Williamson, Joanna Rowe and Margaret Priest about their piloting of Learning Unlimited “Joyning the Learning” materials. Vikki, Joanna and Margaret worked on Fairyland, The Circus and The Unsinkable Ship last session with their primary 1-3 classes, and were enthused by the levels of pupil engagement and parental involvment generated. These resources make extensive use of the Storyline approach to enrich interdisciplinary learning for pupils. The teachers have exchanged email addresses with Catrin and Sofia and supplied them with lots of really valuable reseach information. Yvonne then took our guests to Stenhousemuir PS where Laura Swan welcomed them and shared a loose timetable for their whole day visit on Thursday 21st November. Catrin and Sofia will be able to interview Laura and her primary 1 pupils, about the recent Space storyline they worked on. They will also be able to spend some time with teachers in their classrooms, and speak to the regular Thursday parent’s group. Yvonne enjoyed finding out how Swedish teachers use storyline and discovered that the Swedish curriculum has significant similarities to our Curriculum for Excellence – including a definite place for interdisciplinary learning.

Yvonne McBlain from Falkirk Education Services Curriculum Support team has been finding out about some active and engaging interdisciplinary learning happening at Inchlair Nursery School. The pre and ante-pre school children have become immersed in preparations for the Commonwealth Games following their reading of the story “Captain Bristle’s Thistles”. This story (click to see the story video) really captured the imaginations of the children and has led very naturally into development of their knowledge within various disciplines. Isobel Edmond, head teacher at the nursery, has worked with staff colleagues to involve parents in extending and deepening pupil understanding of this international event. Click here to see one of the documents used to keep parents informed of developments with this interdisciplinary work. Click here to see how one of the children continued to develop his learning at home with his mum. Staff are responding to the children’s interest in the progress of the Queen’s Baton Relay by using a map display within the nursery. The children are developing this display by noting and bringing in photos or other items which show their links to the relay route on the map. Click on the photograph at the start of this post to watch Inchlair pupils sharing their learning. 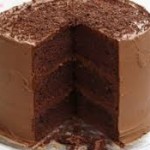 The title of the event was ‘Reading is Rubbish’ and was aimed at parents and families of pupils in Falkirk schools. There were several workshops on offer at the event, which was led by author and patron of reading at Falkirk High School, Catherine MacPhail.

Participants engaged in several activities which addressed the six key comprehension strategies in active literacy reading. They were tempted by the lure of a piece of rich, icky-sticky, ooey-gooey, scrumptious chocolate cake and used fabulous adjectives to describe the treat.

Feedback from the workshop was extremely positive and families went away learning several new strategies to help their children with the development of reading skills at home.

“I just wanted to say how much we thoroughly enjoyed the “Reading is Rubbish” event on Wednesday. Having attended the “chocolate poem workshop” – My daughter, who is 3, stood up in nursery and told all of her peers that “reading is not rubbish, it’s great fun and you even get chocolate cake!”  My son who is P5 (and my reluctant reader) actually enjoyed it more than I thought he would have, he was telling everyone how great it was. I thought the workshop I attended was excellent.” 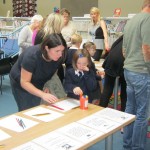 Sharon Wallace, Curriculum Support Officer of the Curriculum Support Team has developed some helpful materials to support Falkirk establishments in sharing the learning at home. This active literacy workshop provides parents, carers and extended families with an overview of the active literacy strategies and methodologies from P1 to P7. It looks at the areas of spelling and phonics, reading and writing and how children can be supported with these at home. 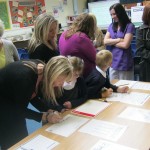 Parents and carers are also invited to be ‘reciprocally taught’ by their children in a series of different workshop activities which include: 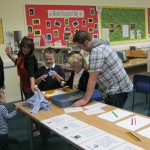 So far this session, the following schools have already hosted workshops:

These workshops are accompanied by parental leaflets aimed at P1-3, P4-5 and P6-7 parents. 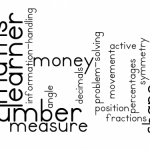 Active numeracy parent presentation 2013 can be accessed from this link. 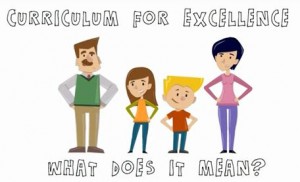 The animation, scripted by Carol Paton of the Curriculum Support Team and voiced by St Bernadette’s Primary pupil Rosie Wallace, explains the key changes to the curriculum and how we are implementing them in Falkirk Council education establishments. 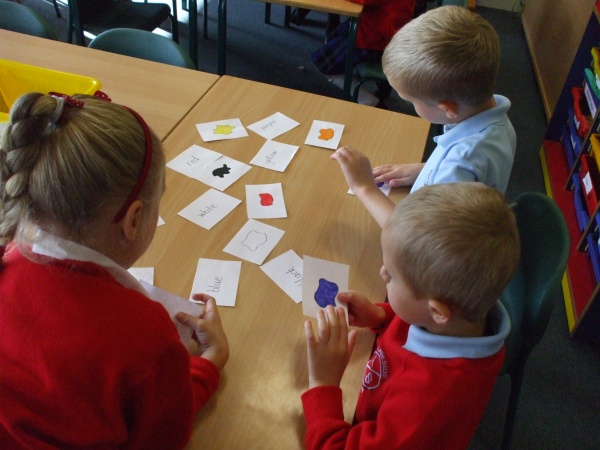 Sharon Wallace, Effective Teaching and Learning Teacher, Curriculum Support Team, delivered an active literacy awareness raising session to parents and staff from Ladeside Primary and Carrongrange. The session involved 6 pupils from P1 – 3 who eloquently demonstrated their Active Literacy skills from all areas. The session began with an overview from Sharon, followed by Reciprocal Teaching of the parents by the pupils at various work stations.

‘Well presented, very helpful, will use the websites, thanks’.