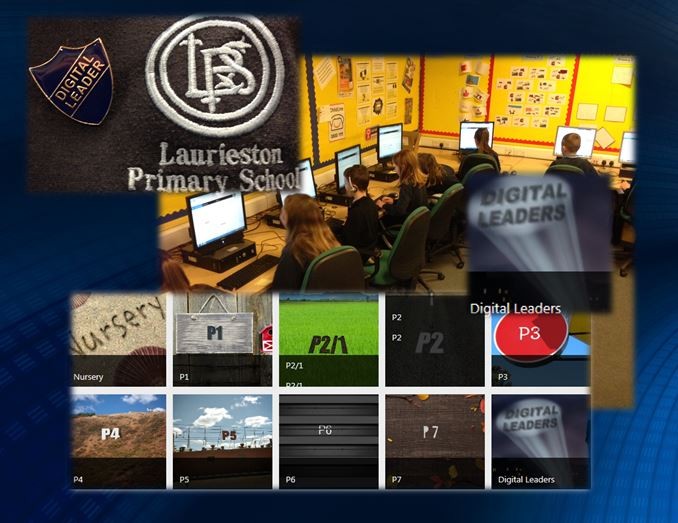 These pupils are being supported for them to then support classes around the school in the use of technologies in their classrooms. They are led by Depute Headteacher Debbie Calderwood.

All learners in Glow have access to their own Outlook email account (each user has 50GB storage, and each email can have attachments up to 25MB), a discussion app (which provides the facility for pupils sharing questions, comments or responses to set tasks (peer to peer or teacher-pupils). weblink sharing, and a document store (where documents were created using Microsoft Word Online as part of Office 365, meaning that the document can be created online without need for the software to be installed on the PC or mobile device).

The pupils all worked simultaneously on a shared Word Online document in their Digital Leaders site (and were shown how the same could also be done in their own OneDrive personal storage area called MySite, giving them unlimited storage space online). They all collaborated on the same document online all at the same time from their own PCs – and there was general excitement as they vied with each other to add lines of text, increase or decrease font sizes, and see the resulting writing from the rest of the group change in front of their eyes, with flags in different colours indicating who had added or amended each section of the writing.

The pupils were encouraged to see if they could use what they had learned using the collaborative writing feature of Word Online to take part in the national collaborative story writing “Digital Storytelling Across Scotland” during the first week in March as part of the National Digital Learning Week. Class sign up and are allocated a specific hour within the week to develop a story started by others, and take the story in whatever direction they wish during that hour. And all learners throughout the country can also view, at any time during the week, the progress of the story developing in front of their eyes! More information can be found at the link below:

Pupils were interested to know that everything can be accessed via a mobile device, with different apps for each tool, including Office Mobile (in order to be able to edit Word or Powerpoint for example) and OneDrive for Business (the ordinary OneDrive app is for the likes of a personal Hotmail account).

Newsfeed and Discussion tool for all pupils

Each class site in Laurieston Prmary School’s Glow site has their own online collaborative class space created for them. Each class space is set up by default with access for pupils to view content added by their teacher, and with teachers able to add content anywhere in their site. The Discussion part and newsfeed app are both set for pupils to be able to contribute so that a teacher can set tasks, or ask questions and pupils are able to respond. The Digital Leaders have their own site which is set up for these specific pupils to be able to contribute in any part of their site, but with all other pupils to be able to respond to questions or tasks set by the digital leaders in the discussions part or newsfeed app.

Several schools have pupils who act as supporters to other pupils in the use of digital technologies. More information about Digital Leaders can be found here: https://blogs.glowscotland.org.uk/fa/ICTFalkirkPrimaries/pupils-as-digital-leaders/