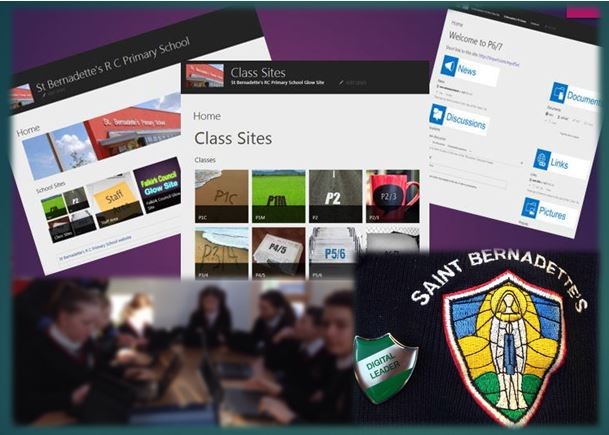 These pupils are being supported for them to then support classes around the school in the use of technologies in their classrooms. They are led by teacher John Cloherty.

This included the use of Outlook email (each user has 50GB storage, and each email can have attachments up to 25MB), a discussion app (which provides the facility for pupils sharing their work with the teacher who has set the task, and for asking questions in a controlled class environment (peer to peer or teacher-pupils) – that’s one possible use of the discussion page in Glow for each class, where the teacher can set the task, the pupils can attach their work, ask questions, and peers or the teacher respond in the confines of a private class area), weblink sharing, and a document store (where documents were created using Microsoft Word Online as part of Office 365, meaning that the document can be created online without need for the software to be installed on the PC or mobile device).

The pupils created documents in their own secure cloud storage (each user has unlimited storage in this OneDrive) and changed the document from private to shared with a peer. Then they all collaborated on the same document online all at the same time from their own laptops – and there were excited when they could all see the same document being edited in front of their eyes with different coloured flags appearing on screen to show who was editing the different parts of the document!

Pupils were interested to know that everything can be accessed via a mobile device, with different apps for each tool, including Office Mobile (in order to be able to edit Word or Powerpoint for example) and OneDrive for Business (the ordinary OneDrive app is for the likes of a personal Hotmail account).

Adding an avatar to their profile

The pupils created an avatar using one of the tools found here: http://primaryschoolict.com/avatars/  which they then added to their profile page in Office 365 tools in Glow.

Pupils were shown how to set an alert in their class site so that they get sent a message whenever anything gets added or changed in their site. They were shown how to click onto their own MySite in Office 365 to access a page where they can see all of the sites they want to get to quickly (both within and outwith Glow), the contacts in Glow, the documents they store in their OneDrive and more.

They also had a look at the national Glow Winter Challenges site where pupils have a host of activities which they can complete in order to gain points and online badges – ideas which the pupils were keen to adapt for their own Digital Leaders site in their school, and for the classes they will be supporting in using Glow.

More information about Digital Leaders can be found here: https://blogs.glowscotland.org.uk/fa/ICTFalkirkPrimaries/2014/04/23/pupils-as-digital-leaders/