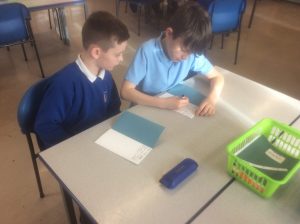 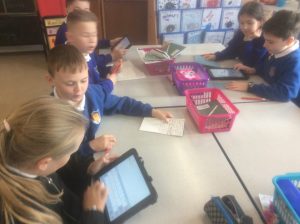 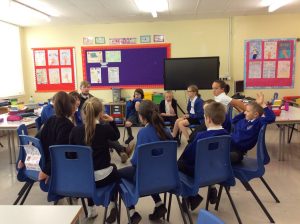 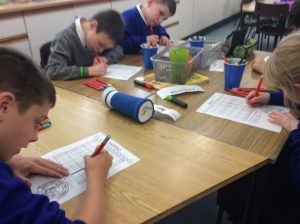 P4 are playing game at circle time. They are asking questions and swapping chairs to mix each other up.
Also they’re talking about a wind turbine it was very interesting.

By reporter Skye and reporter Matthew

——–
Book Discussion By Mackenzie and Azeem

——-
Reporter life in p1b by Drew and Emma
P1 were playing board games with their P4 helpers They were then singing outside, they played tig, they sang GoldiLocks and nursery rhymes.

By Sean and Josh (roving reporters)
In Mrs Elins’s class they are doing Scots words out of books like the Broons, Oor Wullie and other books. They are also listing Scots words to the class to see if they know what they mean. Here’s a few words in Scots mingin, aye, cludgie and lots more.

——–
Super Sewing By Sophie and Ryan

Mrs Clark was doing sewing as the discover and learn groups. They had different materials and they were all different colours. They also had little gems and buttons. Next they made little holes at the top of their material. Now they had to get a bit of string and hook it on to the needle. Some of them found it hard. Then Mrs Clark was teaching them how to sew the thread through without seeing the tread.

The life of P2/3 by Connor and Jack

P2/3 were finishing their tartans some of the them were playing with trains and cars. Mrs McQuade played a song on the whiteboard the children liked it and joined in.

———-
The Magical Music by Kyle and Darrell

—–
Our Roving Reporters are part of our wonderful new Discover and Learn iniative, the children selected this activity to develop their skills of using IT to improve the digital profile of our school. Today they observed activities, took notes, wrote their first mini articles, took photographs and “air dropped” articles and photos to the editor.

WATCH THIS SPACE FOR ANOTHER EXCITING INSTALMENT IN TWO WEEKS

School closes on Tuesday 21st December at lunchtime for our Christmas Holidays. We will re-open on Wednesday 5th January 2022.

We are delighted to welcome a new member of  school staff Mrs Jay Nicol who will be a Learning Assistant with us.

l’m sure our children and parents will make her feel very welcome in Clackmannan. 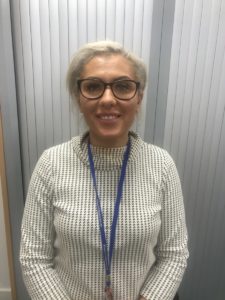 At Clackmannan Primary we are fortunate to have a wonderfully active Parent Council who are always striving to be the best they can be... Our last meeting was held on Tuesday 2nd November at 6.30pm. The minutes of this meeting will be available to view shortly.