At the end of the digital prototype pupils and parents were asked to complete an online survey to collect their views.  This report is a summary of the responses. 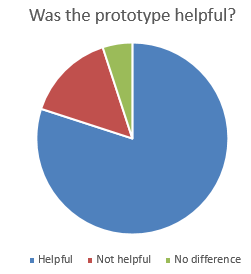 Almost all pupils and parents reported they found the device easily to use, and the resources in OneNote easy to find once they were shown how to find them.

Almost all found the digital inking easy to use and very helpful for physics equations, 50% of the pupils still preferred at the end of the prototype to write on normal paper, 25% of them preferred to use the keyboard to enter digital information and 25% use the digital pen to enter the information. 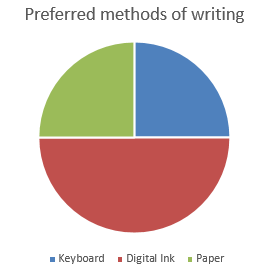 60% of pupils had no issues with their device with 40% having some issues that were almost all fixed. Issues included pen functionality, sometimes it did not write properly and sometimes the buttons did not work.  One pupil had an issue with charging the Surface as the charger was missing. 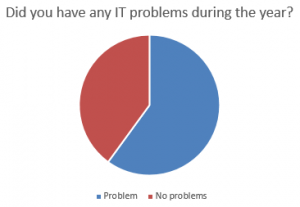 Wi-Fi issues occurred for some pupils using the Surface in classes other than physics due to weaker wireless connectivity in some areas of the school.  One pupil had an issue with the auto saving features of Word online not saving files properly, this was resolved through discussions with Glow support.  Sometimes the pupils did not notice that the Wi-Fi was not connected and this mean that sometimes new work was not synchronised from OneNote to their device or they needed to renter their Glow username and password after an update. Sometimes Windows updates meant devices were updating rather than available for use.

Almost all pupils and 70% of parents found it helpful to be able to install software on the surface.  In addition to Office 365 software (Word and Excel), some pupils installed Serif Draw for graphic communication, Music Writing Software such as MuseScore, iTunes, Avid Sibelius, Flash card software for revision.

All pupils and 85% of parents felt it was really helpful to have Wi-Fi access within school.  Their reasons were;

70% of pupils used their Surface at home for a range of school work with 25% using it only for physics, 5% did not use it for any school work at home.  50% of the pupils said they used it at home every day and 30% every other day.  85% of parents reported their children used it most days. 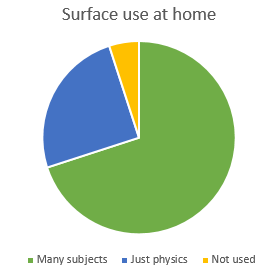 70% of pupils used the Surface in English, 30% in Maths and Chemistry, 20% in Graphics Communications, PE, Geography, French or Design.

30% of pupils reported that no other subjects provided digital resources for their learning. 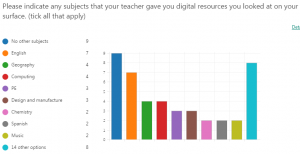 Uses in other subjects included, digital textbooks such as dynamic learning in Geography, researching information, writing assignments and reports, finding past paper questions, for getting feedback on written or digital work in class to reduce time wasted at home, for translation and Linguascope listening in languages.

60% of pupils felt they received more feedback in Physics than in other subjects and all stated they read the digital feedback in OneNote. 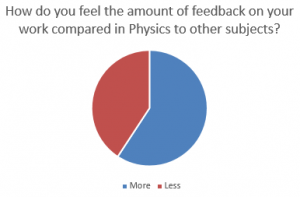 85% of pupils watched the learning videos embedded in the OneNote and found them helpful for their learning.

80% of pupils used the OneNote resources to catch up on work missed when absent or for revision.

80% of parents were aware of the digital feedback being provided in OneNote.

75% of parents knew their child could use the resources to catch up on missed work.

90% of pupils and 60% of parents felt the digital resources helped them to be more independent and control the pace of learning.

Only 50% of parents were aware that pupils also had been issued with a physics textbook.

75% of pupils and parents felt digital skills had improved.

75% of pupils and 60% of parents felt they were now more likely to work independently.

75% of pupils used the Surface for exam revision in all subjects.  20% used it just for physics revision and 5% didn’t use it at all for any subject.  Activities included, BBC Bitesize, Scholar, downloading past paper questions,   A few copied notes for all of their subjects onto OneNote replacing all their paper resources, pupils practiced typing essays for English and History, Quizlet was used for online quizzes.

80% of pupils and parents recommended that future pupils should be issued with digital devices.

Some pupils would prefer a mix of digital and paper resources.  A few parents stated a textbook would have been easier to flick through (they must have been in the 50% unaware that textbooks had been issued).

Some pupils and parents felt they were distracted with the internet and games and this impaired their learning.  One parent believe that the digital device reduced the time spent with the teacher.  One parent commented that whilst helpful to catch up with work, they were not convinced that exam results would improve.  Another felt that once the surface was provided my child lost interest, it was too easy for them to stray off from the work they are meant to be doing and they lose interest.  If the teacher is working with the children there is more chance of them learning and the teacher is more likely to see what stage the child is at, since getting the surface my child lost all interest with Physics.