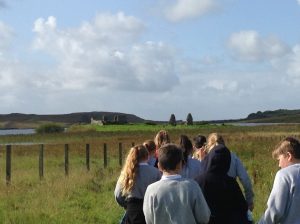 On Wendnesday 29th August we went on a bus to go to Finlaggan. When we got there our class was the first to go and see all of the old buildings and island in the middle of the Loch.  When we were finished outside we went inside to see a lot of old things that the Lords of the Isles would use and other things they used in the medieval times and the family tree of one of the familys that lived there and facts about Finlaggan. When we were done that we got back on the bus but the bus was leaking oil so we had to drive to mundells yard to get a new bus and came back to school.

I enjoyed learning facts about Finlaggan and the best part was when we got there. 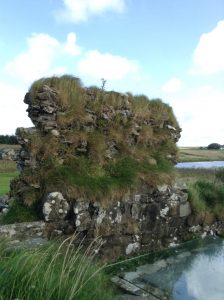 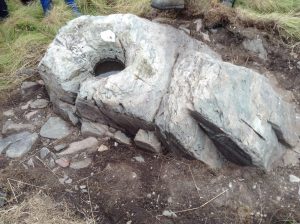 On the 20th of August P6/7 went to Dunyvaig castle. First we got our water proofs and welly boots and got on the bus to the castle up at Laguvulin. We stopped at the path and walked down a hill where we saw the castle. At the end of the hill there was a big grass hill that was slippery but luckily nobody fell. When we went down we met Darko Markovic who gave us a tour. He showed us a big rock with a hole that someone carved. We all tried to find out what it was some people thought it was to wash their hands.

After that a girl called Lauren showed us some artefacts they have found while digging; they found glass, a smoking pipe, a musket bullet, some bones and a cannonball, which was very interesting. Then we split up and went to different trenches; my group went to the sea gate trench and we had to scrape off crumbs of dirt to make the dirt nice and smooth. You could see lots of different Colors. After that we walked up the hill then the bus came and we went all the way back to school. 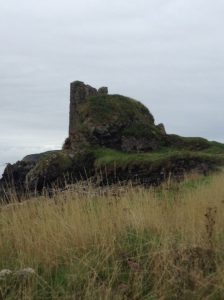 Firstly we were going into school to get ready for Dunyvaig.  We got waterproofs on and then hopped on the bus and went to Dunyvaig. It couldn’t get to the exact location so we had to walk the rest of the way there. Then when we were there a person showed us the castle in Dunyvaig which was built a few hundred years ago. Then in about 300 years it got bombed so now it is a ruin which looks quite cool but you can’t get in it because it is dangerous. But then later then someone showed us some things that they used in that time. The person showed us all the artefacts that they found in Dunyvaig.  They looked old and as well they showed us a huge old cannon ball. It was fired at the war at Dunyvaig which was destroyed in the war and they showed us little things in a bag so it doesn’t break.

And then they showed us the castle but we couldn’t go in it.  The castle had windows a door and even a sea gate where the fish were bought in to the other side of the castle.  There were people transporting things from other countries to trade them for something from Dunyvaig.  And then we had a break and then we started digging for things and I tried to dig and dig. And then I dug even more and more so then my arms would get tried but I kept going but all I found was stones and moss. I had no luck but I was still going then I actually though that they would be a landslide so did the people near me.  And then eventually we had to go back to school so we had to walk up a hill. I felt quite tired going up the hill and at the top the bus was there and we went back to school and had lunch. 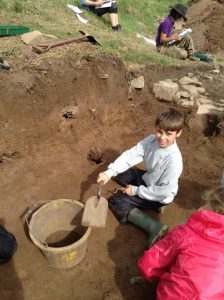 On Monday 20th   August we went to Dunyvaig. We met Darko Markovic who showed us around the site. First he showed us a burned down house, which they said might have been used for fighting.

After that we were shown a rock with a hole in it which was filled with water. They thought it might have been for taking shells off scallops. Then we went to the front of the Dunyvaig castle where we saw two destroyed houses. We were also told the back story of Dunyvaig castle and we were told that it was good at defending attacks because of its placement and the material it’s made of.However one day it got destroyed by cannons and muskets.

Next we went and started to clean some dirt off a dug out rectangle next to a destroyed house and a sea gate used for boats to get in and for people living in Dunyvaig to escape in an emergency.

We put the dirt in buckets and then when the buckets were full we would give them to some people doing the dig and they would empty the buckets then give us the buckets back to fill up again. To do this we were separated into groups. My group was in a rectangle and the over group was like a curved rectangle. In both of the groups we had our own areas to clean bits of dirt, and we were protective over our areas as we made a competition and whoever filled up their buckets first would win, but we didn’t have time to fill up our buckets completely.

After walking down to a table next to a tent which was used to put in things they were using to dig or things they found in the dig someone showed us some things that they had found in the dig, such as a piece of wood that could have been used to put string through and some rocks from the time of Dunyvaig. After seeing the rocks and other items which were handed around we left the Dunyvaig site and went back to the school. I really enjoyed it. 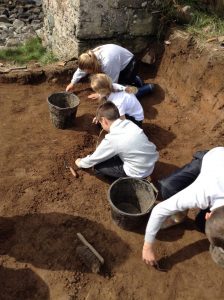 On Monday 20th August Port Ellen Primary School went to Dunyvaig to do an archaeological dig. So our school went in separate groups to the dig and we all found something cool but very common to find like rainbow colored slate, quartz and mortar to hold the stone from the castle together. When digging up the trenches you would be very uncomfortable because you’re kneeling on rocks.  We used trowels and shovels and cleared a level.  It was interesting. 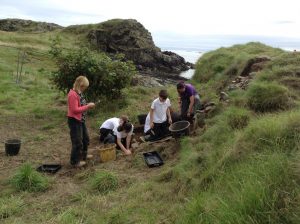 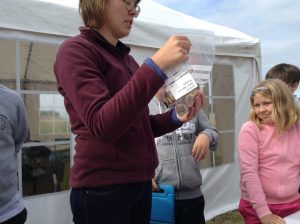 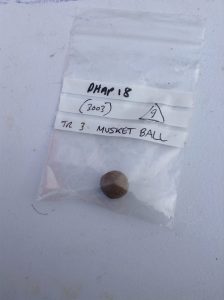