We were really excited when we heard that the archaeologists had found the Seal of John Campbell of Cawdor.  We decided to make our own seals.  Our initial designs were quite detailed: 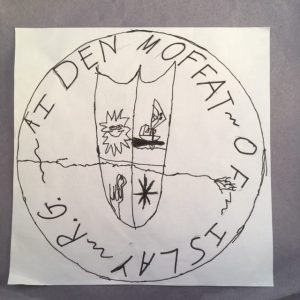 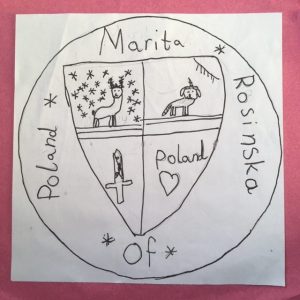 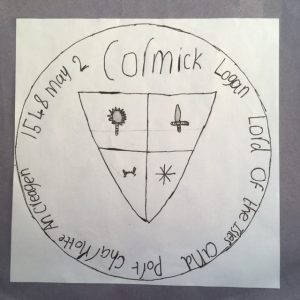 We realised we would need to make them more simple for our seal models.  We used clay to make the seals. 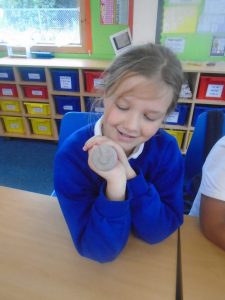 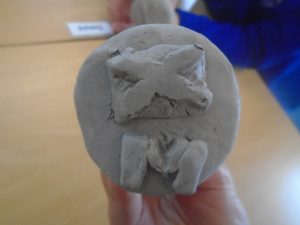 Some of us wrote letters using a feather and rolled them up. 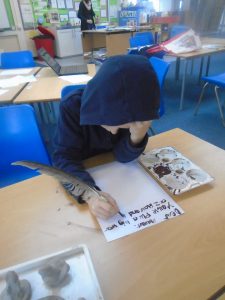 Then we sealed the letters with hot wax. 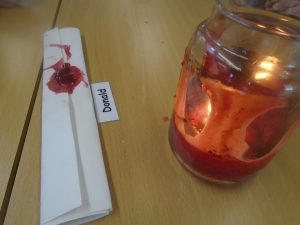 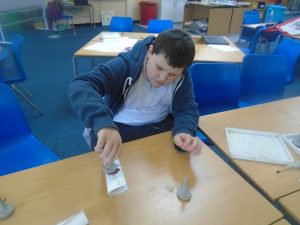 When we pressed our seals on we could see the pattern we had made. 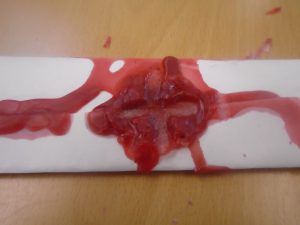 We realised that this was a good way to make sure your letter was private, like an early way to avoid identity theft!

We wrote stories about the history of Dunyvaig.  What would it have been like to be there at the time?  Here is one for you to read…

The siege of Dunyvaig

One day at Dunyvaig castle everything was very calm the villagers were doing their normal thing .

The farmer was just harvesting wheat. Inside the castle John MacDonald, the Lord of the Isles the owner of the castle was just having not a good feeling. The guard in the tall tower looked into the distance and there were about twenty boats coming towards the castle!  They were very far away.  He told John.  John was shocked but he was ready for a fight. The following day the ships

looked gargantuan now. There were so many ships. “They’re coming our way!” said the guard “this is not good! said his friend “we need to get ready for a big battle in one hour…”

The battle began. “They’re surrounding us!” said the guard “the ship looks like it’s looking at me this is really not good” 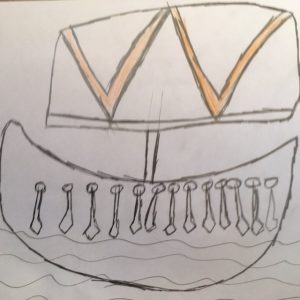 “We’re trapped. It’s a siege. We’ll soon have no food and no water at all so we’re all dead.” I’ll go and tell the Lord of the Isles. He talked to John MacDonald and John said we have to try to get food. He tried but he could not. One of the Campbells tried to kill him but then he sprinted back inside back inside. He told John he could not get any food at all so he sat down and went to talk to his friend. He said “I need to get food we are all going to die! Look at the villagers they’re all panicking they’re all so hungry.”

From the tower the guards shot about ten Campbells. It was their only hope hardly anybody could survive.  A lot had died. They needed food immediately they could only last about two more days. They were all going to die and John was panicking a lot. I mean a lot.

Meanwhile one of the heavily armoured guards tried to get food but he was speared by arrows three hit his head and two hit his arm. His arm was fine because he had armour on his arm but he forgot to put on his helmet so he dropped dead. John dropped his seal and made a run for it. John was petrified so he ran fast as a bullet, he was absolutely panicking. The guards were shooting lots of Campbells.  John shot the big muscly one in the leg he had steel on his leg so he was fine. He whipped out his bow and the arrow hit him in his chest he was not dead yet. The big muscly one was angry he was furious he came into the castle.  And John Macdonald ran down to the sea gate and got in a boat.  He sailed away to freedom.  Sadly, the Campbells won the siege and got to keep the castle of Dunyvaig. 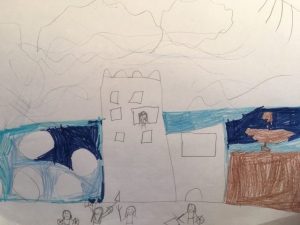 We drew pictures of how Dunyvaig might have looked in the past.  We used our imaginations to think about who might have lived here and what happened to them… 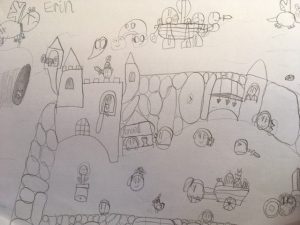 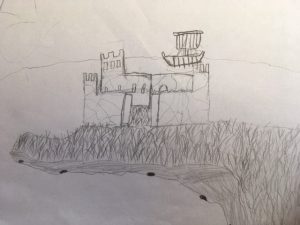 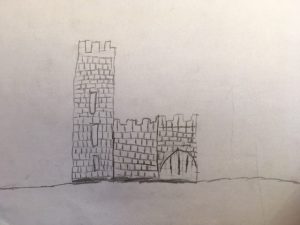 pictures by Erin, Dhruv and Dolan. 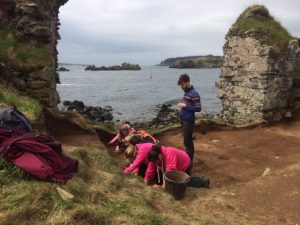 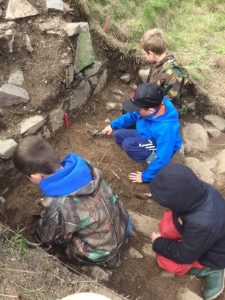 On the Tuesday the 21st of August the P5-7 went on a trip to Dunyvaig castle archaeology site. We all put on our wellies, waterproofs and got onto Mr Mackie’s bus and set off to the castle. I felt so excited when we finally arrived at Laphroaig distillery and got off the bus.

Mrs McLellan told us to go into pairs and we started to walk up the hill to the castle. Once we reached to some houses we smelt wet dog but I forgot about it when I saw Dunyvaig castle sitting on what looked like was a hill of grass.

We walked down a slope and Lauren came and greeted us, she started telling us all about the castle, that the castle we can see is 700 years old and the castle underneath it they think is Neolithic. The also told us that it didn’t actually look like that in the old days.  It is like that because it fell down. Lauren took us to what some of the people were digging up. Lauren said it was some sort of house and we thought it could have been a blacksmiths, you could see what they meant about it being a house, it was as if the roof, walls and everything inside had been taken off the house. Next she showed us artefacts that were in plastic bags, they were bones, animal bones, half a cannonball and what they thought was some kind of fishing weight.

Then we walked into what was a courtyard of the castle, if we looked to our left we could see people digging up the trenches then if you looked to your top right you could see the bit where the boats came in and out, they were digging that up as well. Then Lauren led us out of the courtyard back to where the blacksmiths house and we laid on the grass whilst we waited for what we were going to do next.

Next Mrs McLellan put us in groups, I was with Melody, Hannah and the P5 girls and Lauren took us to the where the boats came in and out of the castle. Lauren gave us a trowel each and lined us along the dig. Lauren said we don’t dig down, we scrape it like as if we are spreading butter on toast and then we started scraping the dirt. We were also told if we had any questions we could ask Nick who was sitting on grass, also if we keep scraping the dirt will change colour a little bit. I found a dead orange bug and some quartz, I felt happy that I had found some quartz and all the colourful little stones in the dirt looked so pretty. I picked up a little stone that felt odd, I asked Nick about it and he said it was sandstone, so I dropped it into my dirt pile and continued digging.

When we had a big enough pile of dirt we could get a shovel and drop it into the bucket. Then Lauren came over and said it was time for us to stop, I was sad but I knew we couldn’t do it all day because we were going to Port Ellen School. We all gave our trowels back to Lauren and she put them into a box and we went with Mr Mackie and Lauren out of the what was a courtyard but now is grass and saw the P5 boys helping dig a part of the wall then the P6s came as well. Finally we said thank you to the archaeologists, I felt sad that we had to go but we couldn’t stay.

I had a really good time digging at Dunyvaig Castle, I looked at the castle one more time, I saw the white tent, the entrance to the courtyard, the remains of the castle and the people dotted around the archaeology site. I carried on walking to Mr Mackie’s yellow bus.

Here is another example of gaelic poetry from Mara:

We have been using our Castle art to create Gaelic Poetry using the vocabulary we have been learning.  Our poems were written as if we were the castle; how we felt, what we looked like.  We wrote the poems out and then used Chatterpix to record our poetry.  Here is Caitidh’s poem:

As part of our Dunyvaig topic we have been learning about what castles looked like at that time and some of their key features.  We looked at lots of examples of castles and used what we knew to create our own impressions of Dunyvaig Castle using pen and pencil and oil pastels.  You can see some of the results below. 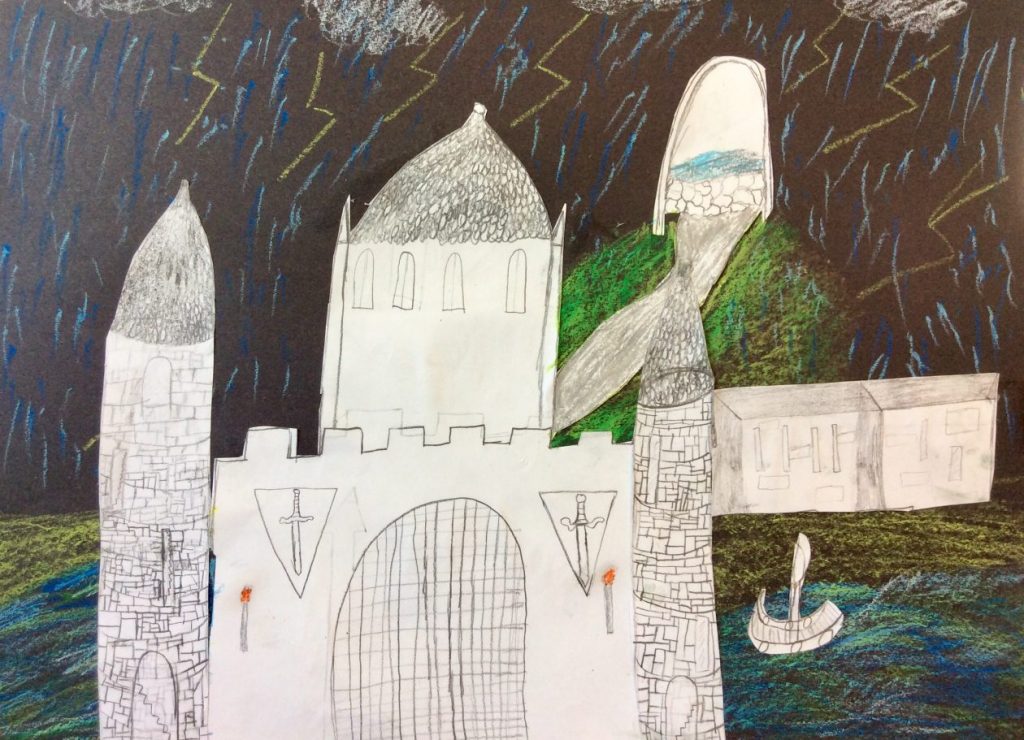 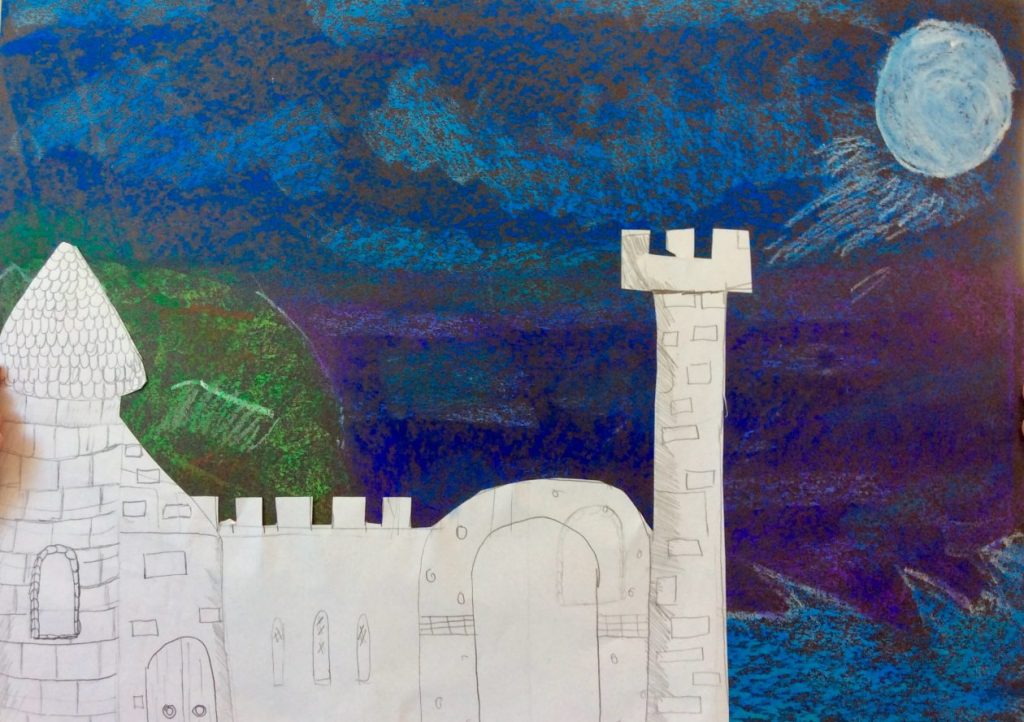 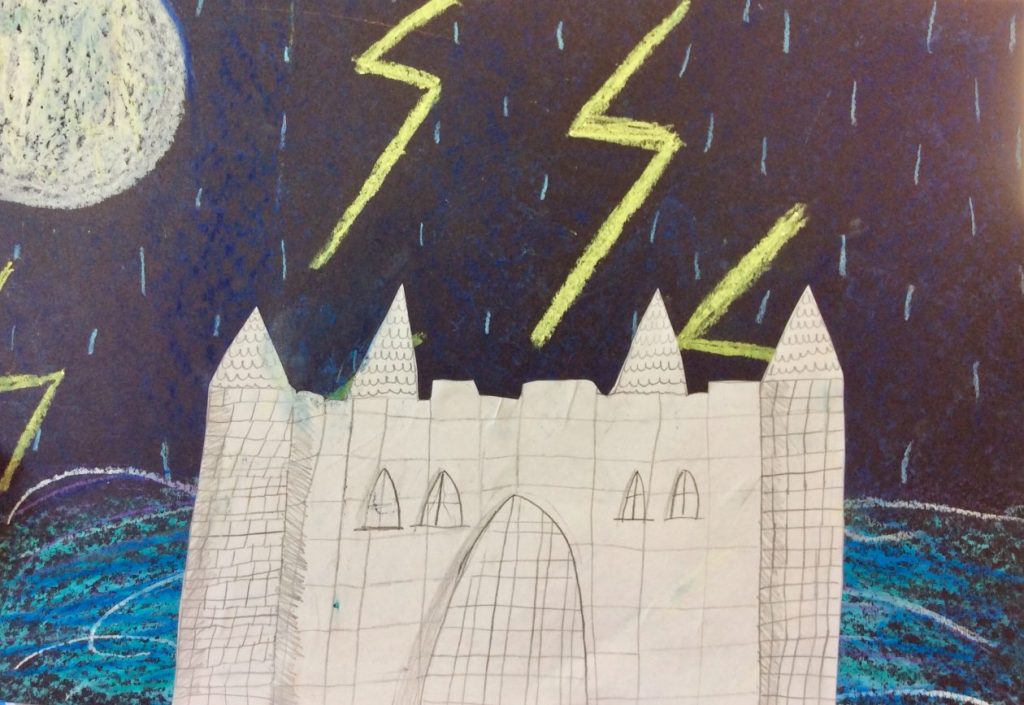