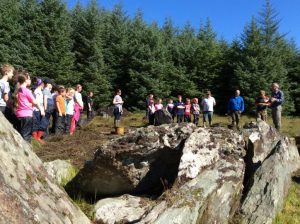 The transition from mobile hunting and gathering to Neolithic farming lifestyles is one of the most pivotal events in human history. The Neolithic emerged in Southwest Asia around 11,000 years ago, and then spread across Europe, reaching Scotland sometime around 6000 years ago.

Islay Heritage is exploring the appearance of the Neolithic on Islay by studying one of the first Neolithic burial tombs on the island: Slochd Measach, otherwise known as the Giant’s Grave. This Neolithic chambered cairn is located in the forestry plantation between Nerabus and the summit of Beinn Tart a’Mhill, and is currently undergoing excavation by the University of Reading in collaboration with Islay Heritage.

Several Neolithic burial tombs are known on Islay. They have rectangular shaped chambers constructed from slabs of stone, and would have been surrounded and covered by a cairn made from stones – we call these tombs chambered cairns. The Giant’s Grave appears to have been the largest Neolithic Chambered Cairn on the island.

These excavations have revealed a previously unseen architecture of the tomb enabling the team to unravel the complete history of the monument from its construction in the Early Neolithic through subsequent use in the Bronze and Iron Ages to the post-medieval times. The cairn belongs to a so-called Clyde group of chambered cairns, of which there are six on Islay. It is believed they date to a period between 3800 and 3500 BC and represent some of the earliest monuments built in the west of Scotland by the first farmers, which replaced previous Mesolithic population, reliant on hunting and gathering. 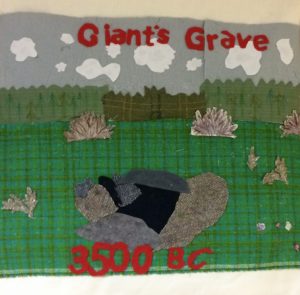 On the 25th of August, Port Ellen Primary along with their teacher Mrs Clark, Mr Gairns, Mrs Logan and Struan’s dad Mr Colthart, went to a fascinating archaeological trip to the Giant’s Grave. We were going there because we really wanted to learn about Islay History. As we got onto… END_OF_DOCUMENT_TOKEN_TO_BE_REPLACED