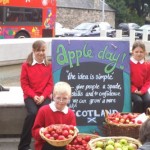 On Wednesday 18th October, 3 of our Eco Committee attended the Scottish Parliament in Edinburgh for Holyrood Apple Day. We went with Merle from the Ardentinny Walled Garden Project to present apples picked from the garden. We had new varieties as well as apples from the old Victorian apple tree in the garden.

Our P1-4 class had been to pick the apples from Ardentinny on Monday and had baked apple flapjacks for people to try.

In Edinburgh we met lots of different groups who had been growing their own fruit, and together with Merle, we were presented a Wee Apples Award. Education Minister, Michael Russell came to meet us and even tried our flapjacks! He said they were delicious. 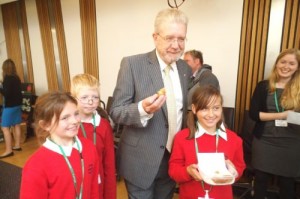 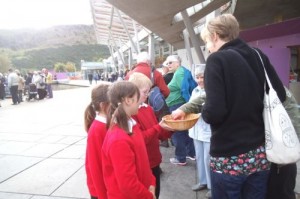 He arranged for us to have a tour of the Parliament building and to sit in the Debating Chamber. It was very interesting. We couldn’t understand why the politicians were allowed to shout out when people were talking, and to boo, it wouldn’t be allowed at Strone!

We had a wonderful day and learned a lot and would like to especially thank all the people at Glenfinart for working with us when we have visited the garden.