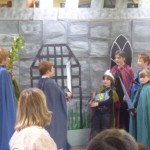 Last week Kilmodan Primary School had another successful tearoom. We have been running a tearoom for the last three years. This year we are raising money for our school to go to Edinburgh for two days. While we are there we will be going to the zoo, Edinburgh Castle and we hope to go to the cinema. The children do home baking for every tearoom and serve the tea and coffee. It is a great time for the whole community to get together.
This time was very successful because the whole school took part in a play called “MACBETH” we had a dance to introduce the characters, we used a song called “Survival” by the band Muse (The official song from the Olympics opening ceremony). Macbeth is a story about a man who is quite nice at the start but his wife turns him into an evil man. All his wife wants is to be queen but King Malcolm cuts Macbeth’s head off then King Malcolm is king.