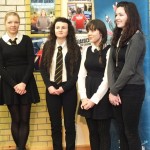 A new set of five, 4-colour posters aimed at encouraging young people to become active global citizens have been produced in Gaelic by SCIAF and will be distributed to schools across Scotland where Gaelic is used and taught. SCIAF and Rosemary Ward from the Gaelic Books Council presented to Gaelic fluent pupils and Gaelic senior pupils on Monday 14th January.
The posters call on young people to ‘Bi fhein an atharranchadh a tha thu airson fhaicinn san t-saoghal’ (Be the change you want to see in the world), ‘Miannaich gun barrachd a bhith agad, ach a bhith has fhearr’ (Aspire not to have more, but to be more), and highlight, ‘Chan ann direach air taobh thall an rathaid a tha do nabaidhean!’ (Your neighbours don’t just live across the street!).

BBC Alba were filming at the presentation for the programme An La, and the news item was in the programme on Tuesday 15th January. Several of Oban High School’s fluent Gaelic pupils answered questions relating to the questions surrounding Global Citizenship.
Copies of the Gaelic posters are available to schools by contacting SCIAF’s Schools Officer Mark Booker on 0141 354 5555 or email: mbooker@sciaf.org.uk. English language versions of the posters are also be available. 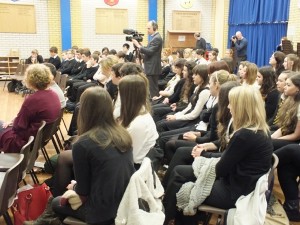