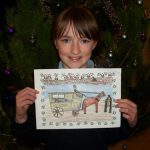 Tarbert Academy primary 5, 6 and 7 pupils researched the history of Tarbert Harbour for the Tarbert Harbour Authority Christmas Card Competition.   In 2013 the Harbour Authority celebrates its centenary and they wanted the designs to reflect this.   The winning design, by Lucy McKinven, shows the mail coach which ran from 1871 to 1913 and the memorial fountain which was donated to the village in 1910 and was removed in the 1940s when it was damaged by a lorry.  (Even though the fountain is long gone many local people still refer to the site where it stood as ‘the fountain’). 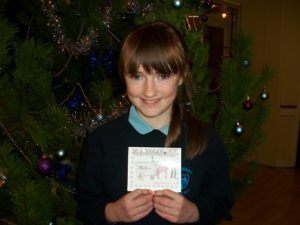 It also shows a Loch Fyne fishing skiff with its mast set well forward to allow the maximum space for the men to haul the catch.