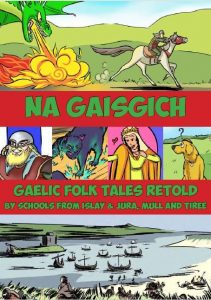 The comic, “Na Gaisgich” was written by primary seven pupils from Islay, Jura, Mull and Tiree as part of a transition project for going into secondary school. The pupils were all learning Gaelic as a second language at school and were able to create the comic as a result of funding from the Scottish Government. The book is based on folklore and fables from the islands, and all ideas were collaborated to form the final product. Social Enterprise Company, Magic Torch Comics, travelled to each of the islands involved to deliver workshops to enable the children to adapt the stories, characters, illustrations and plots into comic strips. The comic is accessible to all as it is written in Gaelic and English. Click HERE to discover the comic.