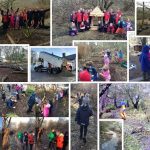 Whilst Dunbeg Primary School is treasured by its local community; its grounds are a treasure in their own right. Over the past seven months pupils, staff and parents have begun to develop them as an accessible, fun and exciting place to learn.
August 2017: The wetland/woodland area hinted at past projects but was thoroughly overgrown and boggy. An inspiring place however with clear educational and well-being potential!

The first small group of pupils set about freeing a former wishing well from the undergrowth.
September 2017: Rotting branches and fallen trees were attended to. A weekend morning was spent by children, parents and staff clearing drains, scrub and weeds; rediscovering the overgrown pond. Parents came to the grounds to work in their own time.

January 2018: Enterprising pupils wrote to Breedons requesting gravel for paths. Twelve tonnes was kindly delivered! One Saturday morning and subsequently during their own time, staff, pupils and parents barrowed the gravel.

We’ve lots more to do to develop our amazing woodland but our project embodies our school values of achievement, community and enterprise whilst encouraging and developing our children’s learning, well-being, citizenship and teamwork.

What do the children think about learning in the woodland?

P2/3:
E: “There’s more wilderness out of the playground.”
B: “There’s so much so see and do.”
P4:
E: “ I love learning about animals in the woodland. I saw a pheasant.”
T: “It’s a bit more creative outside. You can build and make stuff.”
F: “ I just like nature. I like everything about it.”
P6/7:
L: “It’s just better getting out and doing stuff outside. Learning maths is much better outside!”
M: “Instead of staying inside learning about nature, you go out and learn about it. That’s much better!” 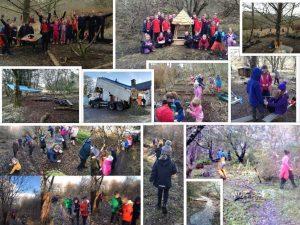