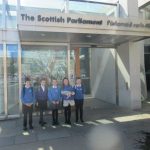 Bien joué! ¡Bien hecho! Gut gemacht! Molto bene! (Well done!)
On Monday 15th May five Primary 6 pupils from Taynuilt Primary travelled to Edinburgh to the Euroquiz National Final 2108. The competition involved 470 schools from all over Scotland taking part in Euroquiz heats to represent their own areas. Taynuilt Primary won our area quiz to represent Argyll and Bute. There were 31 schools at the Final, from the Borders to Shetland to the Western Isles, and was it held in the Debating Chamber of the Scottish Parliament. 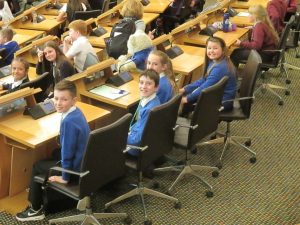 We arrived in time to have our lunch in the Members’ Room before taking our place in the Debating Chamber. The Quizmaster was the Deputy Presiding Officer Christine Grahame MSP, and the whole event was streamed live on the Scottish Parliament TV.

There were three rounds, Geography, Languages and Understanding Europe and the questions were very challenging! We have been studying hard over the last few weeks and gave some very good answers.

We didn’t make it through to the final two teams, but we really enjoyed the whole day and came away with some great photos, a goodie bag and good memories! “Merci” to SEET for organising the event and to Mrs MacPherson for coaching us so well! You can see the whole event by following the link to HERE