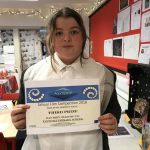 During December Andy Crabb (filmmaker) and Dr Suzi Billing from SAMS came to Taynuilt Primary to teach the children how to make short animation films based around aquaculture.

One of Taynuilt’s entries (The animation of Billy the Scallop and the naughty Octopus, by Bernadette McMullen P7) was judged to be 3rd overall. The film will shortly be available on the Aquaspace website.

The school received a certificate and £50 in Amazon vouchers. Bernadette has chosen to spend these on arts and crafts activities for the school as that is her particular passion.