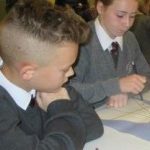 Two P7 pupils from St. Joseph’s took part in the West Dunbartonshire Maths Challenge on the Wednesday of Maths Week Scotland. Ten teams of eight children went head to head to solve Mathematics problems within a limited time frame. The last challenge of the morning was the ‘Hot Seat’ where one child from each team was the ‘runner’, responsible for running to an adult with the answer to their current question and collecting the next question until they had successfully answered 30 questions.

The competition was fierce and the atmosphere electric as the children focused hard on winning. Over 80 pupils took part and table ‘8’ was running neck and neck for first place into the last round with table ‘4’. St Joseph’s two pupils were part of table ‘8’ and it was so exciting to watch them concentrate and focus on the title. With everything coming down to the last challenge, table ’8’ submitted their last correct answer milliseconds after table ‘4’ thus moving them to second place. However, with over 80 pupils from P6 – S2 in the hall, this was still a glorious feat. Well done St. Joseph’s – another competition success to add to the plethora of competition wins last session – long may it continue!