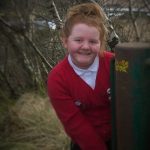 Alex Geddes of Lochdonhead Primary fought off stiff competition to win the regional stages of an art competition, run by Gas Distribution Network (GDN), to raise awareness of the dangers of carbon monoxide.

The primary seven pupil produced and performed a lyrical poem which saw her win £300 for the school and £150 for herself.

As a result, Alex has been invited to attend the UK final in London on Friday 30th June, during which time she will meet with representatives from SGN and GDN, before being given a tour of the House of Commons.