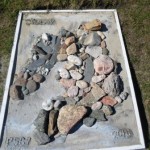 The pupils of Port Charlotte Primary school have been learning about the fascinating geology of Islay. We were very lucky to have the help of local geologist David Webster for our project. David took us on field trips to every corner of the island and we learned lots of interesting facts about Islay’s geology and how the rocks which make up this amazing island were formed;

from the two billion year old metamorphic rocks in the Rhinns to the world-famous Port Askaig Tillite and including sedimentary limestone at Mulindry, igneous dykes at Saligo and Bunnahabhain, Jura quartzite, Port Ellen Phyllite, Bowmore sandstone and many more… We had the brilliant idea of making a geological map of Islay using all the rocks we had gathered, and with help from David, Mr Vessey and Mr Mackie we have created a permanent Islay Rock Map in the school grounds. 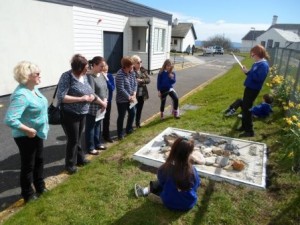 Visitors were invited to the unveiling of the Rock Map this week where they were treated to an informative guided tour by the children as well as joining in workshops which included presentations on rocks and minerals, making crystals, an interactive rock game and the making of sedimentary, igneous and metamorphic rocks from chocolate- some lucky visitors even got to taste the rock samples!


We would like to thank David for all his help, we couldn’t have done it without you!