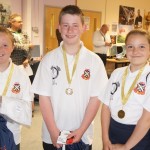 Open to all Scottish school children ages seven to fourteen the Kodu Kup competition saw pupils from ten schools across the country take on the challenge of coding and creating a game. Impressing the judges with their game creation and entrepreneurial skills the ‘Rural Racers’ from Dunoon Primary School were crowned Scottish Kodukup champions. The champions now have been invited to present their game to a team of expert judges at the UK Finals in Reading on the 13 July with the chance of taking home the UK Kodu Kup!

A representative from Dunoon Primary School commented, “We are obviously delighted about the success of our ‘Rural Racer’ Team pupils. Not only did they win the Kodu Cup 2015 but to learn that they are going on to represent Scotland at the UK finals in Reading at Microsoft’s UK HQ is a fantastic achievement.

Gathering at College’s Paisley campus the Kudo’s teams were invited to present their games to a panel of experts from the education and gaming industry including: Nigel Kennington, Games Development Lecturer at Edinburgh College, Alan Wood, Head of Education at Microsoft Scotland and Ian Stuart from Education Scotland.

“Using Kodu in our school has increased programming skills for our pupils, as well as providing the children with a greatly enriched learning experience. We see Kodu as a vital part of the firm foundation of IT skills required for life, learning and work. Kodu skills also naturally lead on to advance programming through the use of Project Spark. Our pupils within the upper stages of primary are computer buddies and share their knowledge and expertise with others of their own age and those younger. We find that the children respond well to peer learning and what better way to show case new games, programming skills.”

David Renton, Curriculum and Quality Leader for Computing at Paisley who organised the event on behalf of Microsoft said “The KoduKup is all about encouraging children of all ages to get involved in programming and inspires creative computing skills. Kodu is a 3D world creation and programming environment which children as young as seven can use.

3 thoughts on “Kodu Kup Scottish winners from Dunoon make it to UK final!”