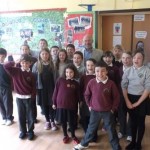 On Wednesday 17th of June, Tam Baillie – the Scottish Commissioner for Children and Young People – came to visit Strachur Primary School. Primary 4/5 asked him to come to our school because they have been doing a very interesting topic on the ‘Rights of The Child’ and learning about the United Nations Convention on the Rights of The Child (UNCRC).

We also wanted to talk to him about what we have been doing as part of the ‘Send My Friend To School’ campaign which is about getting all the children in the world educated.

Tam told us about his job which is to protect the rights of all children and young people under 18. He also told us about how he became Scottish Commissioner for Children and Young People. Primary 4/5 put on an assembly about the UNCRC, and the ‘Send My Friend To School’ and at the end of the assembly Tam joined us in singing a song. Two pupils from P 4/5 gave Tam a tour of the school before he left. It was an interesting and fun visit.
By Primary 4/5