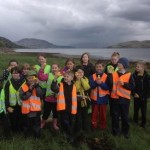 Minard held their annual Duck Derby on Friday the 29th. Thankfully the weather held while the races were on. There were 17 races with 20 ducks per race. The winners of each race then took part in the grand final! The prize, lunch for two at the George Hotel, was won by Heather Miller and the runner-up was Adam Barclay. He won a £30 voucher for Dewars store in Inveraray.

Furnace children joined them for the afternoon.

Minard are extremely grateful to the local businesses that donated prizes for each of the races. As there were more prizes than races we were able to have a ‘Lucky Duck’ draw at the end. Furnace pupil, Eilidh Hannah, won the prize, a 30-minute spa treatment at the Loch Fyne hotel.

With donations, the grand total of £346 was raised!