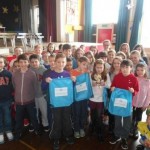 Congratulations to the P6 team who have won the Argyll and Bute Heat of EuroQuiz!

EuroQuiz is being hosted by the Scottish European Educational Trust
click HERE who organise this annual quiz for P6 children.


Our P6’s worked hard in teams of four each week to research the population, history, MEP’s, capital cities and five facts on their three chosen countries. Then on the competition day they answered questions from the whiteboard. It was “really hard” said one member of the winning “Europe Geniuses” team.

The “Europe Geniuses” have now won the Argyll and Bute heat and will go on to compete against the winning teams from other local authorities in the coming weeks.