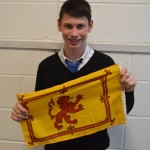 Dunoon Grammar School pupil Robert Miller receives a call-up to the Scotland National Disabilities Senior Squad. Dunoon Grammar School’s Robert Miller is preparing himself to take on this best footballers in the world, having gained his first ever call-up to Scotland’s National Disability Senior Squad. Robert, who had previously played for the Development Squad received the all-important letter on November 7 informing him of his inclusion in the senior squad. Creative midfielder Robert will now be playing alongside the best in the business, with the Scotland first team consisting of many experienced players, including the captain of the GB Paralympic team. He will attend regular training sessions at Largs as the squad prepares to take on the England, Wales and Northern Ireland in the Home Nations championships in 2015.
Robert was delighted at his advance to the senior squad and said “I feel honoured to play for the first team and also proud as I know the coaches see potential in me. I now just have to keep working hard and improve as much as I possibly can.”

David Mitchell, Head Teacher added “Robert’s call-up to the Scotland Senior Squad is fantastic news and a marvellous achievement. We are delighted that his talent, drive and determination has been recognised by this call up and we are confident he will do the school and indeed his country proud when he takes the field to win his first senior cap.”