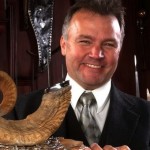 One of Argyll and Bute’s instumental music tutors Stuart Liddell, from Inveraray, has been crowned the Glenfiddich Piping Champion. The event, now in its 41st year, is seen as piping’s “ultimate accolade”. The championship is only open to those who have achieved success in other solo piping competitions earlier in the year. Pipers from around the world converged on Blair Castle in Perthshire to take part in the event, which was established in 1974.
Mr Liddell said, “Competing at the Glenfiddich Championship, you know that you are up against the best of the best, and there is no knowing what way it is going to go on the day. It is always going to be the smallest fraction that separates the winner from the others.” Well done Stuart!!
(photo: BBC website)

3 thoughts on “One of our tutors scoops the ‘ultimate accolade’ !!!!”