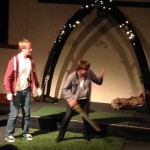 Primary 7 Turn Theatre Critics At The Edinburgh Fringe
Returning from the Summer holidays, you would think pupils would want to break themselves in gently to their final year at Primary School, but not the Primary 7s at St. Mun’s who are studying Shakespeare this term.
On the 19th of August, pupils travelled to Morningside, Edinburgh and Venue 132 of the world famous Fringe Festival, where they were due to watch Shakespeare’s A Mid-Summer Night’s Dream, as performed by the students of Fife College.

Before the performance pupils were treated to a drama workshop led by the students and a familiar face and former pupil of St. Mun’s, Kyle Blincow, who is studying for a BA in Acting for Stage and Screen and was to perform later that afternoon, as Lysander.
The workshop saw pupils cavorting about the acting space as fairies, nobles and mechanicals (would be actors) as well as, bringing back to school with them, acting games which have become firm favourites in drama lessons.

Having read and discussed the play before they saw the performance, pupils were well equipped to understand the ‘true’ text but with a twist….as although the language was familiar to them the Fife students had set their production in the 80’s, with period music, props, costumes and attitudes, a little less familiar as they weren’t born until over 20 years later.

The performance went down a storm, with a standing ovation from the audience. Afterwards the cast came back to chat with pupils and answer their questions.
Back at school pupils have written theatre reviews of the performance which they will soon send to the college for the students to read. As no other review was done of the show, the cast are waiting with baited breath for the young critics thoughts on their performances!

Inspired, the Primary 7s intend to write their own version of the play, which they will perform and send to the college for them to watch. 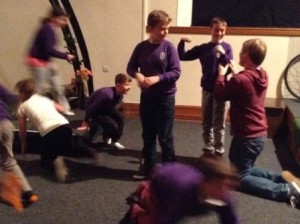 1 thought on “Primary 7 St. Mun’s At The Edinburgh Fringe”