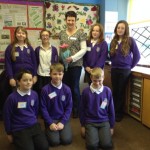 With the recent announcement of the local Queen’s Baton Bearers for the final leg of its journey in Argyll, the Primary 7’s at St. Mun’s Primary School decided to invite some of them along to share their stories. Gillian Purdie and Pev McChlerey were the first to be put through their paces as the children conducted a question and answer session, which they filmed and later edited. Gillian, whose son Graham is a pupil at the school, said she was very honoured to have been nominated. Gillian is a radiographer at Dunoon Hospital and was nominated for her charity work for Leukaemia and Lymphoma. She is best known in schools for organising the ‘Bikeathon’ with her band of helpers.
Pev McChlerey, who is best known for her organisation of the Cowal Police Sports and the Police 5-a-sides, had a very interesting story to tell. Pev has been involved in the sport of Judo for many years. Having been a Judo champion herself, she has also been an official at the Special Olympics, which have taken her all over the world and provided her with a huge haul of commemorative medals from the events; she brought these along to show the Primary 7.
Alison Currie, from the Grammar School was next to be put in the hot seat! Alison, who is Gillian’s sister, was nominated by Active Schools Co-ordinator Lindsay Mitchell. She said she is very excited about carrying the Baton, but just like her sister, is a bit worried that she might drop it. Alison told pupils a little about her greatest personal achievements, one of which was being part of a team who sailed across the Atlantic.
There is one other Baton Bearer that they haven’t quite managed to talk into giving them an interview yet and that’s their own teacher, Mrs. Blincow, who will carry the Baton into the stadium on Sunday 13th July.
Despite it being the summer holidays the children are very excited and plan to line the route to cheer everyone on.
In addition, a surprise e-mail from ‘Game On’, who provided many educational resources for the Commonwealth Games, told the school that they had been allocated 10 tickets for the Badminton, for their involvement in the programme. 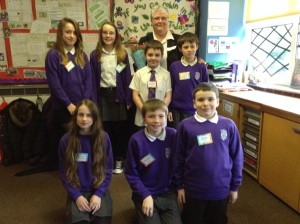