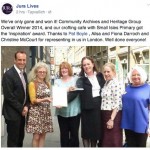 The award will be formally presented to those who worked on the project, on Jura, on 26th June and the children will be attending the ceremony. A piece on the Community Archive Website states ‘The Isle of Jura – with a population of about 200 – has been named ‘Community Archive and Heritage Group of the Year’ for its oral history project ‘Jura Lives’, which interviewed people about their memories of the island’s unique way of life and created a new sound archive. ‘Jura Lives’, a 2-year Oral History project run by the Jura Development Trust, aimed to collect and preserve the remote island’s heritage and enable easy access to it,using the most modern digital recording equipment and computer-power. Along the way, focus was on strengthening community confidence and providing learning opportunities based on a shared heritage. The island’s tiny community now has a searchable, digital catalogue of audio and metadata for nearly 1,000 records from more than 180 sources. A souvenir CD called ‘A Landscape of Lives’ of 30 selected stories from the catalogue has been produced. While the project initially targeted the residents and visiting community of Jura, others from the wider Jura diaspora were also welcomed and recorded. ‘From landowners to crofters, from shopkeepers to artists to groups of school friends, from those who live on the island now to those who knew it from the 1930s and all decades since… their stories are now preserved in their own voices and own words for all time,’ says Jane Carswell, who led the project. Well done everyone! 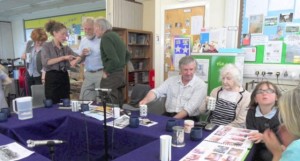