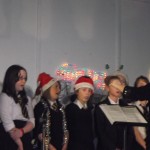 The power and skill of Oban’s award-winning pipe band opened the annual Christmas Cracker Concert Monday night in the Games Hall at OHS, setting the bar high for the the evening’s programme.

One of the stand-out performances of the evening came from Kyle McKechnie with the gorgeous solo piece “Anthem” from the romantic West End musical “Chess.” Piano virtuoso Iena Kurishita played “Tempest” and the Oban High School Choir sang several selections to cheering audience response. The show-stopping Oban Staff Choir performed a medley of “Amazing Grace/Pachobel’s Canon” and the rockin’ “Beboppin’ Santa” that took the crowd to interval.

The evening concluded with a spirited performance by the Pipe Band with the seasonal favourite “Winter Wonderland,” a song most likely not first recognised as lending itself to a full pipe band treatment. Audience response was huge throughout, making the evening a real success with, of course obligatory mince pies and good cheer along with the annual masterful emcee stylings of Mr McKenna. 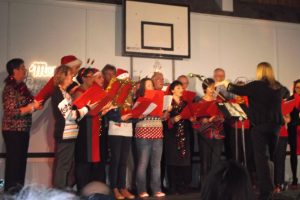