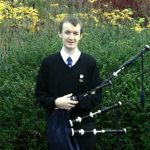 Argyll and Bute Council’s Policy Lead on Education and Lifelong learning, Councillor Aileen Morton, has added her congratulations to Rothesay Academy pupil Daniel McDermott who has been offered a much sought-after place at The Royal Conservatoire of Scotland, in Glasgow.
Daniel, who is a member of the National Youth Band of Scotland and plays with the Inveraray District Pipe Band, will study for a BA degree in Scottish Music and Bagpiping.

“I understand Daniel is one of only four young people to achieve a place on the degree course at this illustrious school and offer him my warmest congratulations. This is an example of what can be achieved by identifying and nurturing talent, for which the staff at Rothesay Academy must be praised, and the sheer determination of a young man in achieving his dream,” said Councillor Morton.

As a solo piper, Daniel has won many prizes including the “National Piping Centre Junior Champion” in 2013 and the under 18 “March, Strathspey and Reel” at the Inveraray Highland Games.

Deputy Head Teacher at Rothesay Academy, Robin Ferguson said, “Entry to this course is highly competitive with there being only four places reserved for pipers on the Scottish Music Course. We are all delighted that Daniel has received an unconditional offer to pursue his studies on his chosen degree course.”

1 thought on “Rothesay Academy pupil off to Conservatoire”