The next edition of Digital Parenting is now available to read, print and download. Digital Parenting contains really useful information and advice for parents and carers to help keep their children and young people stay safe online.

This  week we practised logging on and off  the netbooks independently.

Logging on can still be quite tricky as we need  to recognise both lowercase and uppercase letters.  Logging off correctly means that the netbook is ready for the next person to use.

The Technical Troopers came down to support us with all of this which was very helpful. Once we had all logged on successsfully, we discovered that the Technical Troopers had planned a Purple Mash activity to help us consolidate some of our learning about pirate ships.

As we painted each part of the ship we were able to name the part and say something about its purpose. We were then shown how to save our work too, so we can share it with our families at home.

A very big thank you to the Technical Troopers for helping and supporting our Digital Learning this week. We loved having you in our classroom.

We also used the netbooks and  i-pads this week in Literacy and Numeracy tasks. A very popular game that helped us to recognise and read words was the Poop Deck Pirates game.

In Maths and Numeracy we used Hit the Button and Dino Park Maths to practise our addition and subtraction.

To celebrate Education Scotland’s National Digital Learning Week, our Technical Troopers have been working extremely hard to make a #digitaldifference in Mid Calder Primary School. They have delivered lessons across all stages of our school, teaching our pupils how to use a range of digital tools to enhance their learning. Primary 4A, 4B and P3 received a lesson on how to use the Glow tool Forms, while P7/6 and P5A learned how to the Glow tool Sway. The Technical Troopers helped our Nursery children to develop their positional language by using the Bee-Bots, as well as supporting P1 with logging onto the netbooks and accessing a pirate themed activity using Purple Mash. Primary 6 were taught about the language of coding using Hour of Code, while P5B continued to develop their programming skills using Scratch to create a simple game. P3/2 were shown how to use the different features of iMovie to create a short film about their IDL context.

The Technical Troopers received lots of positive feedback from both the teachers and the pupils, and they did a fantastic job at sharing their own digital skills confidently to make a #digitaldifference.

We are learning to identify reliable sources online

To celebrate National Digital Learning Week, P5B became Digital Detectives and were learning all about how to spot the truth online. We discussed the different ways we can find out information and, as we live in a digital age, we realised how much we rely on the internet to find out facts and help us with research. However, we are also aware that we can’t believe everything we read online! We learned about lots of different ways that you can check if a source is reliable, for example, by looking at the date it was published or updated, considering the credibility of the author, and double checking the facts using a least one other site. We were given a range of QR codes and URL links and we had to use our detectives skills to work out whether or not we could trust each site.

In addition to this, we have also been receiving coding lessons from Sean and Ben in Primary 7 to celebrate Digital Learning Week. We had been using Hour of Code to learn about the language of programming, and then we heard that P7 were becoming Scratch experts so asked them to share their skills with us.In our first lesson, they helped us to explore the features of Scratch, and in the second lesson they extended our skills and helped us to begin to create a simple game. By the end of our two lessons, we were even able to teach each other following learning conversations with our experts.

We have also been using our own and the school’s devices to take part in the Scottish Sumdog contest this week to develop our mental maths skills.

National Digital Learning Week 2017 was taking place Monday 15 – Friday 19 May and was about celebrating how digital technology can make a positive difference to learning and teaching.

P7 have been learning about coding as part of their learning on for one of the technologies outcomes:

I can create, develop and evaluate computing solutions in response to a design challenge. TCH 2-15a

This started with learning about what coding is through a suitable platform. We chose Scratch as it is a child friendly and easy to use. We started with this as a reading task by reading the instructions to create a simple Scratch game. This gave us the understanding of using blocks of code and instructions to make things happen in a game. This included creating characters, making objects move and creating a way to win. We learnt that the computer will only do something if it has the right set of instructions so it is really important to check each stage is correct. We then started making and designing games to meet a challenge such as winning by getting 10 points, collecting items or beating an opponent.

It has been Digital Learning week across the country and we at MCPS have been celebrating by  sharing our learning across all levels. The technical troopers have many talents and Cailin and Olivia  shared their knowledge of Sway, a tool for producing presentations, where the children can either work independently or contribute to a group Sway. Cailin and Olivia were the teachers for the morning and gave a short presentation as to how to use Sway and the features that can be used. Some of the children had already used Sway and were just building upon their knowledge but others had not used it before and needed a little bit more guidance. By the end of the lesson all children were able to contribute to our class ‘How does your garden grow?’ Sway and had made their own, some added pictures and some added videos. It was good to see Amy continuing with her Sway during free time Friday this week and building on her knowledge. I hope that some children might just use Sway in the future when presenting.

I hope you all have a fantastic holiday weekend. 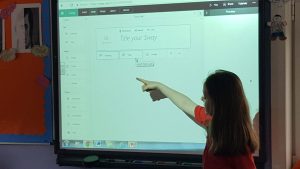 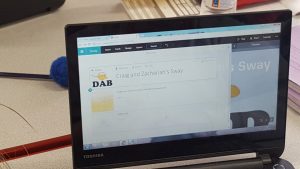 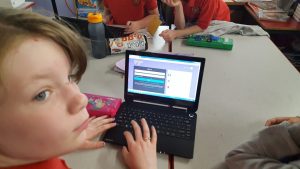 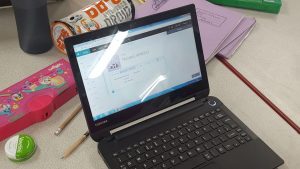 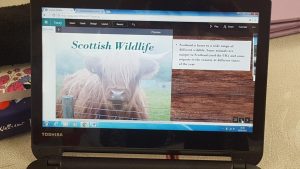 The Primary 5 boys and girls came to the nursery to show us how to use the beebots. They learned positional language, forwards, backwards, side to side, left and right. They used these directions to program the beebots and make them move. They linked it to number by rolling the dice and the number they rolled was the number of moves the beebot would make.

“They were going backwards and front ways!” – Sophia

“They were really fun.” – Eilidh

“I liked the beebots because I made mine go round in a circle.” – Hannah

We used the visualiser to project the children’s writing on to the smartboard. They were able to show their friends how they wrote their name and how they formed letters. They loved seeing their work on display. 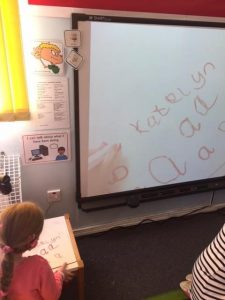 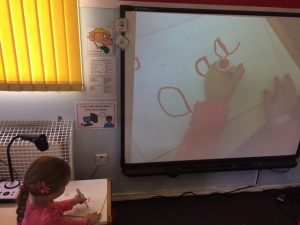 The children have continued to use the ipad apps and have enjoyed choosing songs for the new ipod! They are now in control of the music in the nursery! 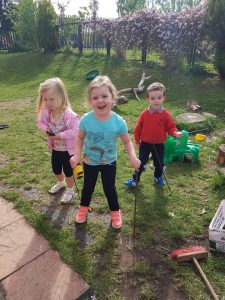 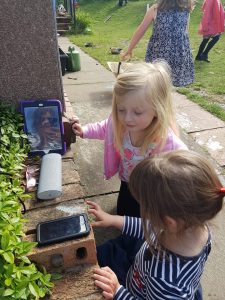 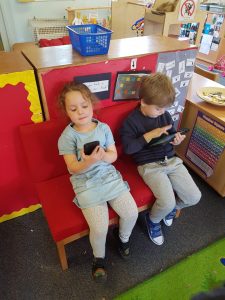 The go pro was in full swing keeping track of the children’s learning. It was keeping active and was also used for the children interviewing each other about what they were doing. 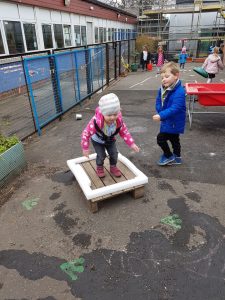 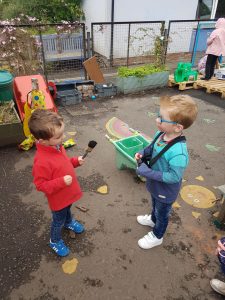 Some of the boys and girls have been practicing their keyboard skills while learning their letters and sounds. 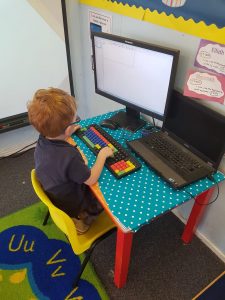 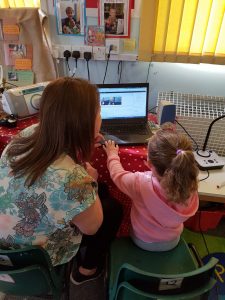 This blog will keep pupils, parents/carers and the local community up to date with information and news from Mid Calder Primary School.